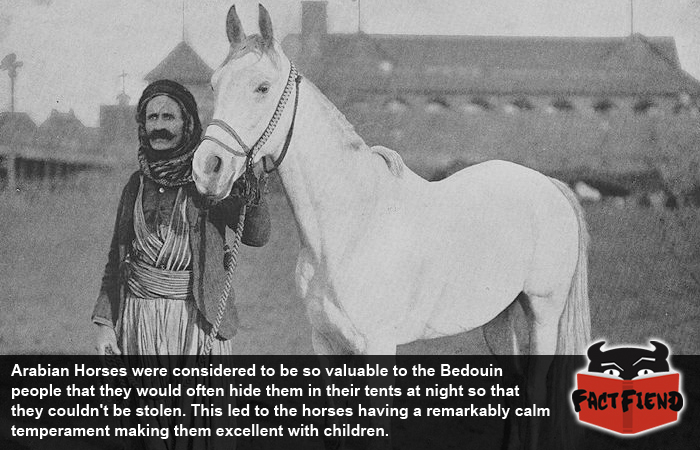 Due to the many tasks horses are required to perform, it’s very difficult to assert that any one breed is “the best” that said, Arabian horses come pretty damn close.

As you’ve probably guess from their name, Arabian horses hail from the dusty, unforgiving deserts of the Arab world which gives them an almost unfair advantage over other, lesser horses in a number of ways.

For example, Arabian horses pretty much own the world of endurance horse racing because there is virtually no other breed of horse out there that is able to keep up with an Arabian horse over a certain distance. Years of selective breeding and exposure to the harsh environment of the fucking desert has made the Arabian an incredibly hardy breed that could probably win most races by running in a straight line non-stop until the other horses died of dehydration. Being desert animals also means Arabians are able to function on considerably less water and food than horses of comparable size, which also gives them a more muscular, yet leaner frame which the lady horses just love.

The reason Arabian horses are so versatile is because, to put it simply, they had to be. Historically the Bedouin people of the Arabian peninsula took meticulous steps to only breed to most superior specimens they could, being very careful to only breed the most Batman-tier horses they owned. Because the Bedouin used their horses for warfare and hunting, a horse with a courageous temperament was preferred however, because the Bedouin also liked to ambush their opponents they also preferred quieter, stealth horses. After generations of selective breeding the Bedouin were left with super fast horses that required almost no food to maintain that were deathly silent and impossible to spook.

As you can imagine, the Bedouin were pretty keen to stop people stealing their kick-ass super-horses and it soon became commonplace for the Bedouin to hide their best horses inside their own tents at night, which meant they had to spend a lot of time in close proximity with children, who are notoriously prone to being kicked in the face by horses.

This meant that on top of all of the other traits bred into the Arabian, the Bedouin also took extra care to only breed horses that were okay around people, children and possibly ghosts.

The end result was a horse that was suited for everything from warfare to training a child how to hunt and everything in between. In fact, Arabians are so calm and awesome that they’re one of the few breeds you can safely let near a small child without worrying about them having their jaw kicked off, which is nice.