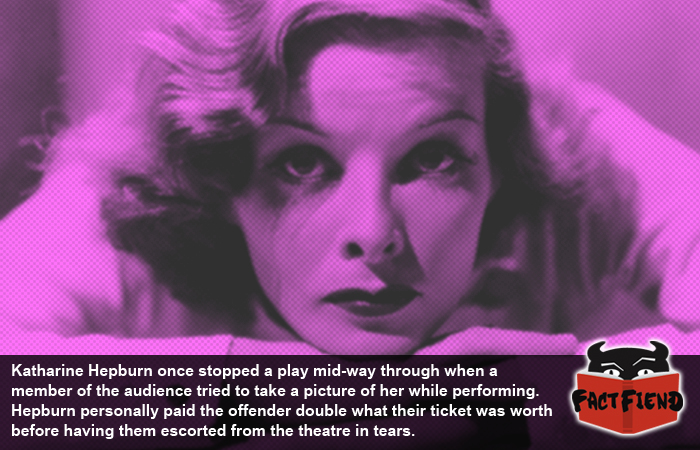 In our continuing series charting celebrities from history who were seemingly born without the gland that produces giveable fucks, today we’re here to talk about Katharine Hepburn. A lady who spent the better part of half a century kicking misogyny square in the dick in a rockin’ set of beige slacks.

As you may or may not know depending on how many times you’ve read this article, Hepburn famously hated any and all forms of publicity, going out of her way to piss off photographers and interviewers in anyway she could so that they couldn’t get usable footage or photographs of her. On one occasion, Hepburn tried to beat the shit out of a member of the paparazzi while simultaneously trying to spike his camera into the pavement at Mach 3 for daring to take a picture of her. On another she had a woman thrown out of a theatre in tears for taking a picture of her during a performance both because it was extremely rude and because fuck her, she could.

When it came to acting, Hepburn always insisted on doing her own stunts because she hated the fact none of her stunt doubles ever stood up straight. If you don’t believe that, please continue thinking it while looking at this picture of Hepburn skateboarding like a boss at like 50 years old. 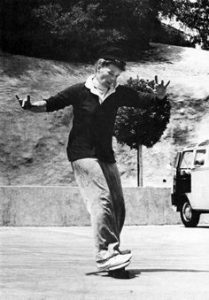 Conversely, when Hepburn wasn’t on screen kicking unholy amounts of ass, she swanned around in a casual but still painfully stylish pair of baggy pants, knowing that she was pissing just everybody off by refusing to conform to the gender stereotypes of the day. When studio heads asked her to put on a dress to conform to the “ladylike” image they’d spent years crafting for her, Hepburn responded by buying a suit so sharp it could give a diamond marlin paper cuts on its fucking eyes.

An MGM executive once got so pissed off with Hepburn’s stoic refusal to play their game and stop wearing comfortable clothing, that they paid one of their employees to sneak into her trailer and steal her pants. When Hepburn realised that her prized pantaloons had been pilfered by a sticky fingered asshole, she walked around the studio lot in her underwear making everyone feel awkward until they were given back.

Hepburn was also one of the few Hollywood starlets of the 30’s, 40’s and 50’s who allowed herself to be pictured without make-up and openly chastised anyone (read: men) who criticised her for doing so, often telling men who said they preferred women in a skirt or make up to shut the fuck up and put a skirt on themselves if they liked them so much.

Even in her 70’s, Hepburn would confront men being sexist or abrasive dip-shits, scolding them for rude behaviour in open view of anyone who cared to listen. On one particularly hilarious occasion, when a man in the front row of a play she was in put his feet up on the stage, Hepburn not only stopped the play to tell him to cut that shit out, but came out from backstage during the curtain call to yell at him again because she was so incensed by his disrespect. Because that is how Katharine ‘God-damn’ Hepburn rolled.

To read about another celebrity whose fuck giving gland didn’t work, read about how Marlon Brando once broke into his own fridge with a crowbar just to take a single bite out of a massive wheel of cheese.