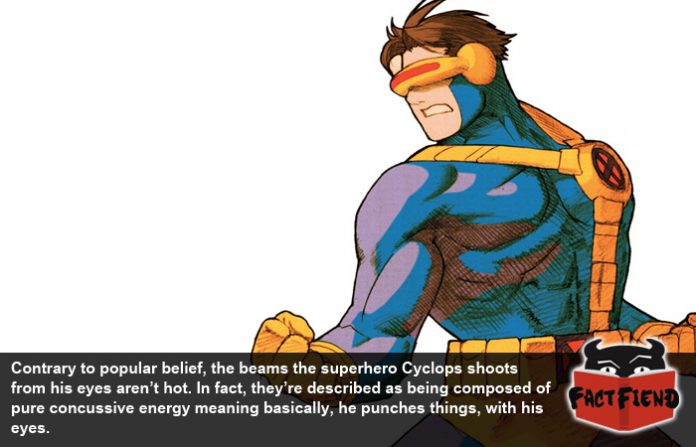 At first glance (fuck you we will never apologise for that pun) the superhero Cyclops’ powers seem fairly straight forward. He fires lasers from his eyes. According to the comics though, Cyclops’ powers are a little more, shall we say, odd.

So odd in fact that it took Marvel over 2 freaking decades to actually come up with a conclusive explanation for how in the hell they actually work. Initially it was suggested that the bitchin’ laser show Cyclops shot out of his head every time he opened his eyes was the result of his body absorbing and then explosively releasing ambient radiation from his nearby environment. 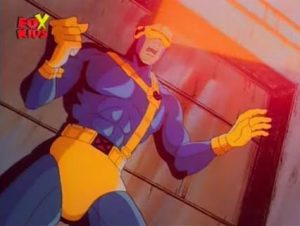 However, Marvel later backtracked on this in the early 80’s (20 years after the character was introduced and established) and instead explained that Cyclops’ eyes are actually a portal to a “non-Einsteinian universe” filled to the fucking’ brim whatever the hell his optic blasts are made of. Every single time Cyclops opens his eyes, energy from this universe ejaculates out and ruins the day of whomever he happens to be looking at. Simple, right?

But here’s the thing, the energy from this universe is entirely kinetic. This means that those beams you see punching through plate steel doors and ripping apart concrete like a torrent of diarrhoea through single ply toilet paper are doing so through raw concussive force.

Essentially the beams from Cyclops’ eyes function like jet of high-pressure water in that they can cut through steel and the dreams of children by basically punching it millions of times. That’s not us simplifying things by the way, fans of Cyclops (an oxymoron if we ever saw one) have affectionately dubbed the mysterious source of his optic blasts “the punch dimension” as a nod to the fact his power is essentially launching a solid beam of endless concussive energy out of his face.

Amusingly, after years of showing Cyclops use his powers to level mountains and punch the Hulk in the dick, Marvel have elaborated that as a byproduct of his mutation, Cyclops is immune to the strange concussive energy he fires out of his eyes to explain why his head doesn’t fly off whenever he uses his power. This has led to many fans speculating that Cyclops could, if he so desired, use his powers to fly if he held an object in front of his face and opened his eyes.

Sadly, we don’t think we’ll see this in the next X-Men movie.