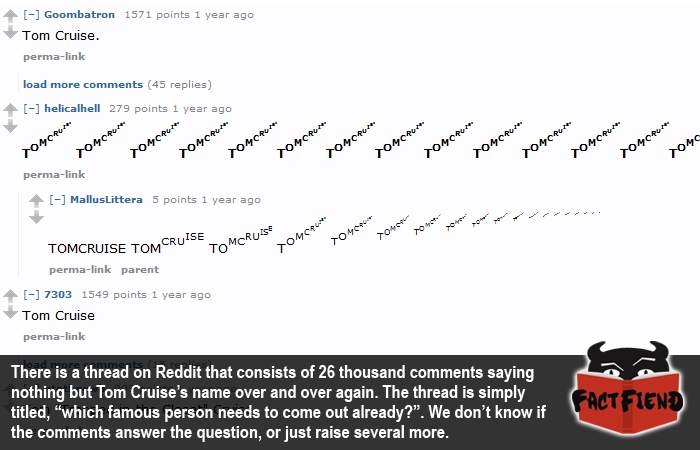 Tom Cruise has a weird relationship with the internet, though he enjoys a reputation as one of the nicest people in Hollywood here in the meat world, online he’s widely mocked because of his religion. Because apparently that’s a legitimate reason to hate a guy who saves people’s lives on a daily basis. However, lost amongst the bile directed at Tom Cruise is a genuinely hilarious testament to how the internet will never let anything go. A 26,000 thousand comment thread on Reddit consisting of ever more elaborate ways of calling him gay.

The thread, which started out as a simple question posed by a bored Reddit user curious about who the nice folks in the, Redditsphere? Yeah, we’ll go with Redditsphere, thought should come out already. We presuming in this situation “come out” refers to coming out as gay, otherwise we’re going to have to fire the guy who wrote the title to this fact.

Almost immediately the thread was flooded with replies, all of which said “Tom Cruise”. Now if several thousand people had just responded saying that they thought Tom Cruise was gay, that would be pretty hilarious on its own but after the thread died down, it flared up again. To quote the person who originally posed the question, 6 months after it went viral, it went viral again and they were “getting 50 Tom Cruise’s per day in [their] mailbox again“.

Meaning that people stumbled upon a several month old thread, full of literally thousands of people saying they thought Tom Cruise was gay and decided that the person who posted it hadn’t quite got the message and sent them several hundred emails about it. The last person to have a question answered that thoroughly was the guy who asked Jesus, “what, only five loaves and two fish? Don’t you think you could whip something else up?” right before they were crushed to death by 40 tons of fish shaped like a middle finger.

Say what you want about Reddit, but boy do they know how to run a joke into the ground.