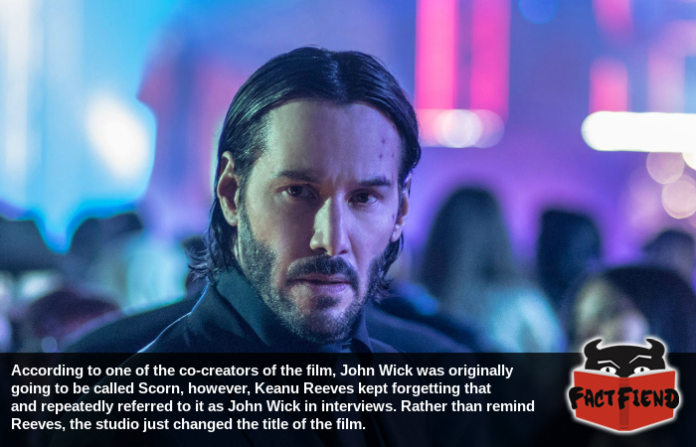 John Wick is a film in which Keanu Reeves plays a big dick hitman so feared by the criminal underworld that the mere mention of his name causes hardened gangsters to shit their pants in fear. Curiously, despite that sounding like the coolest shit ever, the film initially had a title so forgettable Keanu Reeves called it John Wick instead.

You see, long before the film had even entered production, John Wick existed as a script simply titled Scorn about a retired, hitman, legendary amongst his peers, who wages a one-man war against the criminal underworld after someone kills his dog.

As an aside, in the original script John Wick was supposed to be close to 70 years old so that his reputation for snapping necks and cashing cheques made sense. However, the directors decided that, in order to have a bunch of kick-ass fight scenes where the titular Wick perforated some bad guy domes with pinpoint accuracy, they should cast an actor who wasn’t “literally older”, but instead had been a fixture of Hollywood for so long that them playing a character like John Wick made sense.

The thing is, while Reeves was excited about appearing in the movie, even going as far to train extensively with experts to develop a new form of kicking-ass tentatively dubbed, gun-fu. Something Reeves was already pretty familiar with admittedly but it never hurts to polish your skills we guess. 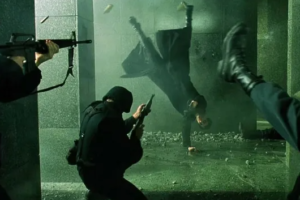 Anyway, as much as Keanu Reeves enjoyed making the movie, he reportedly struggled to remember it’s name. As such, whenever he was being interviewed prior to its release and asked about the projects he was working on, Reeves would respond something along the lines of –

Something that was apparently a cause of great frustration to the studio who were kind of annoyed that the film’s star didn’t seem to know what it was called. Which, yeah we kind of understand because the lead actor being wholly unable to recall the name of the film doesn’t exactly scream “quality feature”. However, the marketing department saw Reeve’s mistake differently, seeing it as, essentially, millions of dollars worth of free advertising.

Upon realising this and that it would just be more awkward to have to correct Reeve’s earlier statements, the studio instead just up and changed the name of the movie. Now while you’d think the film’s writer would have been annoyed by this, according to later interviews they actually prefer John Wick to Scorn, stating simply, “I can’t imagine it being Scorn.” Which is fair, because, just like the character, the name of the film now invokes the image of a grizzled badass hell-bent on revenge rather than someone who’s slightly annoyed.