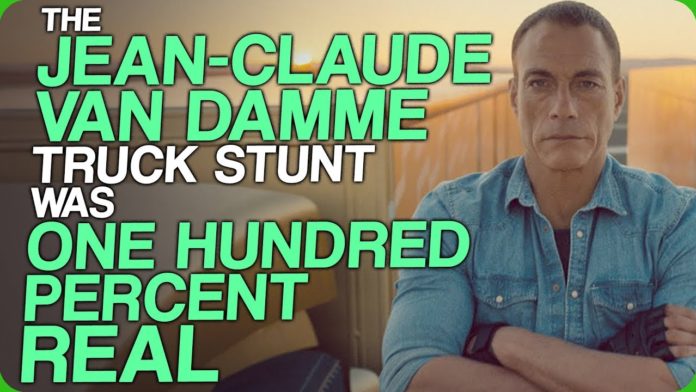 Jean-Claude Van Damme is mostly famous for kicking things very hard and lounging around with his legs at an awkward, obtuse angle. In 2013 Volvo decided to take advantage of this fact by having Van Damme do the splits between two of its trucks, a stunt that contrary to what you may have heard, was 100% real.

Designed to showcase the stability of Volvo trucks, the ad was the brainchild of a Swedish ad agency called Forsman & Bodenfors that specialises in more, unusual branded content. Part of a series of ads intended to show off the features of Volvo trucks in a more novel and original way, Van Damme’s testicle stretching display of finesse was intended to be the crowning moment of the campaign.

The thing is, while Van Damme’s video was understandably the most famous to emerge from the campaign, it tends to overshadow the other ads, some of which featured people with similar sized and potentially larger balls. Like this guy who, to show off the clearance of Volvo trucks, volunteered to be buried up to his neck in sand and have one drive over his own fucking head at high speed.

Other stunts involved a ballerina walking a tight rope between two trucks driving on a closed road and one of a hamster turning the wheel of a moving 32 ton juggernaut to show how sensitive the steering of Volvo trucks is.

Moving back to Van Damme, the actor reportedly had only three days to prepare for the stunt and admitted in an interview that he barely practised or warmed up. When later asked why, Van Damme casually explained “I am a little short of trucks at the moment”, presumably while sporting this exact look on his face the entire time. 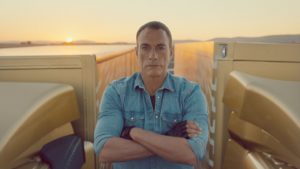 To accomplish the effect, Van Damme was kept aloft by a hidden safety wire and small platforms were hidden behind the wing mirrors of the trucks so that he had somewhere to put his feet. Reportedly completed in a single take, Van Damme was insanely chill about the whole doing the splits between two trucks screaming along at 70 mph thing, telling USA today that the only thing going through his mind at the time was the music of Irish singer, Enya.

So yeah, if you ever find yourself re-watching that ad, because holy shit is it kind of awesome, remember that it’s real and the Jean-Claude Van Damme was listening to Celtic inspired pop in his mind the whole time.