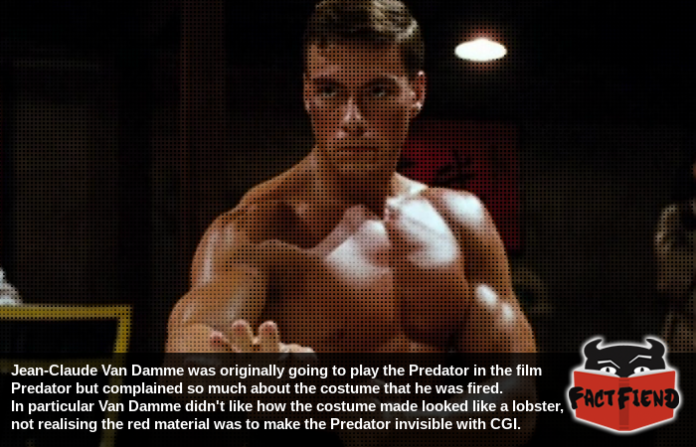 The Predator ranks alongside it’s occasional cinematic enemy the Alien as one of the most iconic movie monsters of all time. A fact that we feel can be partly attributed to the the towering frame of Kevin Peter Hall which helped sell the creature as something that could realistically pose a threat to Arnold Schwarzenegger. Curiously, the original idea behind the creature was for it be much smaller and agile, which Jean-Claude Van Damme put an end to by complaining that it looked like a lobster.

You see, long before the Predator was an 8 foot tall armour plated alien barbarian, it was envisioned as a nimble-footed, acrobatic hunter that was more akin to a ninja than a walking meat-sledgehammer we all know and love today. 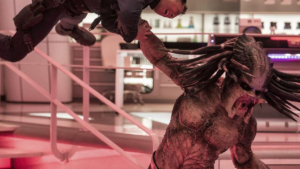 Specifically the idea was to have the creature played by a skilled martial artist, with the intention being for said martial artist to use their formidable athleticism and fighting prowess to sprint-kick the ever loving shit out of the film’s cast of large fridge-shaped men. 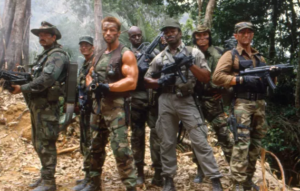 The thought process behind this being that the raw physicality of Schwarzenegger and his co-stars would contrast with the agility of the Predator, creating an interesting dynamic the film could explore. A neat idea that was almost immediately abandoned because Jean-Claude Van Damme wouldn’t stop bitching about the costume. In particular, how red it was.

To explain, to render the Predator invisible in the dense jungle environment the movie was filmed in, the costume Van Damme had to wear was covered in red fabric so that it could be more easily removed from shots in post-production. Something the designers of the suit assumed Van Damme either knew or had at least been made aware of by his management. Apparently though Van Damme had absolutely no idea about this and assumed that the fearsome hunter that was going to hold it’s own against an entire squad of special forces soldiers, looked like this … 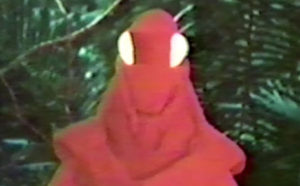 In addition, Van Damme found the suit horribly restrictive and not at all conducive to showing off his sick martial arts skills. Coupled with the oppressive jungle heat, weight of the costume itself and the fact the water on set gave everyone crippling diarrhoea, this made for a horribly uncomfortable experience for the actor. So much so that he just up and quit or was fired depending on which source you consult, either way, Van Damme left the project and the suit was designed after they realised that nobody could move in the costume in a way that made it threatening.

As a result, the Predator underwent a complete design overhaul centred around the towering frame of stuntman Kevin Peter Hall, turning it from a bumbling lobster-looking piece of shit into a 8 foot tall warrior badass. Which as redesigned go, is up there as one of the best.