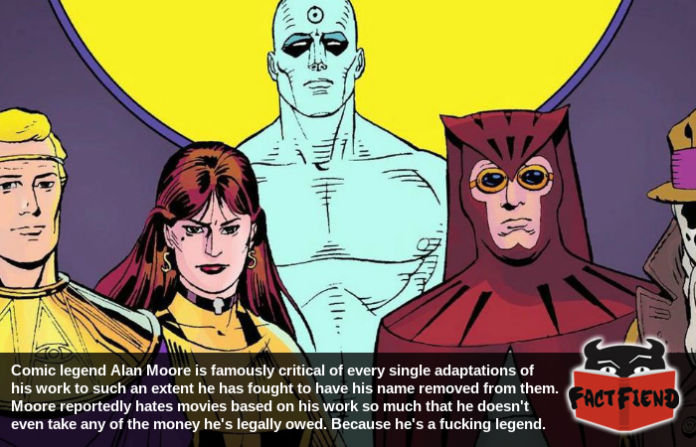 Alan Moore is a veritable titan of the comic industry and he’s had a hand in creating what are oft considered some of the best comics ever made. A towering, near mythical figure, even outside of the industry, Moore has forged a reputation as one of the hardest people to please when it comes to adaptations of his work. Largely because he has openly admitting to fucking hating every single movie or show based on his work.

Well known for being an irritable, crotchety old man who just wants to be left the fuck alone – which we completely understand because, well, mood – Moore is incredibly difficult to track down, let alone get to talk about his work. However, on the few occasions people have convinced him to open up he has expressed abject disappoint in every film based on one of his comics. Especially the film that you like. 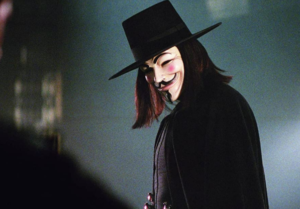 In addition to never watching any of the movies based on his work Moore has publicly shit all over almost every single one. As an idea of the lengths Moore will go to, to distance himself from these movies, during a press conference for V for Vendetta  a producer mentioned off hand that he’d given his blessing for the adaptation. This seemingly innocent remark pissed Moore off so much that he threatened the producer with legal action if he didn’t retract the statement.

Just to reiterate for anyone whose eyes glazed over due to the ridiculousness of the previous sentence, Alan Moore has genuinely attempted to sue people for merely suggesting that he might approve of one of the adaptations of his work. Knowing that we honestly wouldn’t be surprised to hear about him trying to fistfight people he sees wearing Watchmen merch or some shit. 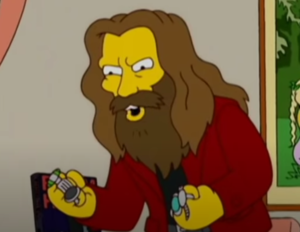 Something that probably has you wondering, why exactly Moore hates movies based on his work so much? Well that answer to that has a lot to do with Watchmen. You see, when Moore wrote the comic he had an agreement with DC that the rights would revert to him when it went out of print. An agreement he naively trusted the comic giant to honor, which they obviously didn’t because like fuck they were going to stop milking that giant blue cow. 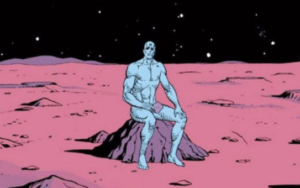 As a result of DC never letting the comic go out of print, Moore has had to sit by and watch as his most famous and popular work was bastardised beyond recognition by Zack Snyder and the guy who wrote Lost. What makes the latter adaptation especially bad  though is that the showrunner for the Watchmen TV series, Damon Lindelof, is reportedly a big fan of Moore’s and as such, knows that he hates adaptations of his work. When Lindelof was asked how he squared being a fan of Moore’s whilst simultaneously doing the one thing he hates he basically shrugged and sagely pondered if what he was going could even be considered hypocritical. A statement so fucking stupid we can absolutely believe it was uttered by the guy who wrote Lost.

Anyway, Moore’s dislike of Hollywood is such that he has actively fought to have his name removed from any and all adaptations of his work and staunchly refused to accept any money for them. So while he is admittedly a bit of a prick, he’s at least a very principled one.