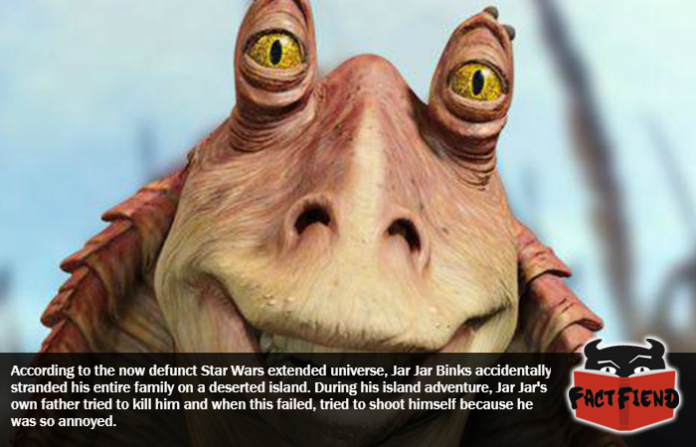 We feel it’s fair to say that the Star Wars prequel trilogy has a, mixed reception from fans and critics. However one thing most everyone agrees on is that Jar Jar Binks can go fuck himself. Something even the character’s own father agrees with given that he once tried to kill him for being a clumsy dipshit.

It’s important to clarify first though that what we’re about to talk about isn’t exactly canon anymore because Disney deleted basically the entire Star Wars extended universe. Which is a shame because almost every single thing about this particular story is fucking amazing. For starters it reveals that Jar Jar Binks dad was a swashbucking, Gungan badass called, get this, George. 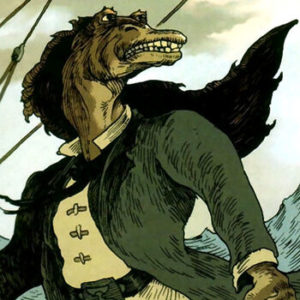 An accomplished mariner with saltwater in his veins, George earned his keep tracking down giant sea monsters and beating them to death with his 80 ton Gungan penis. A noble pursuit practised by the Binks family for generations, George was so keen to carry on the great Binks lineage that he married a woman he had no affection for purely to sire an heir. A decision he came to regret upon learning that his son was a complete and utter baffoon unworthy of the great Binks name. 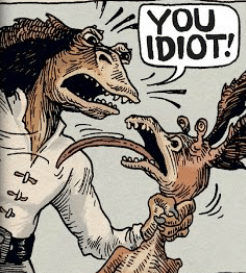 In a comic simply titled, George R. Binks (which to date marks the only appearance of the character in Star Wars media) George’s life is shown to fall apart from almost the moment Jar Jar was born. For starters, the character is shown to be deeply depressed that his son is a lazy, irresponsible slacker with no affinity for seafaring whatsoever. a crushing blow for a man whose only desire in life was to have a child who could carry on his family’s legacy.

Further, Jar Jar is almost terminally clumsy and inept, which directly results in the Binks’ getting stranded on a deserted island when Jar Jar is unable to understand a simple direction. Mainly, steer away from a 100 foot long sea monster. 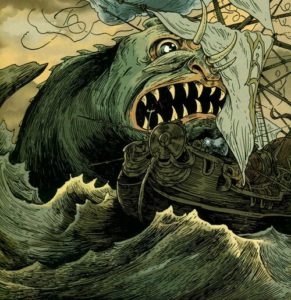 While stranded on the island Jar Jar is so annoying that his father literally opts to name the desolate rock they’re stuck on “Binks’s Woe“. George eventually gets so frustrated with his sons incessant and endless idiocy that he actively encourages him to swim for help, something he knows is tantamount to suicide given how far they are from land. Jar Jar is ultimately stopped from doing this by his mother which only depresses George further.

In an attempt to escape the shame his son brings George decided to just up and end it all by obliterating his frontal lobe with a laser gun. 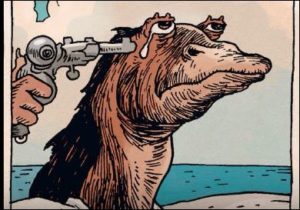 Now this is where the story gets fucking incredible because George’s wife obviously tries to talk her husband out of shooting his head off, imploring him to think of his son. A request that has the literal exact opposite effect and actually makes George so depressed he pulls the trigger. 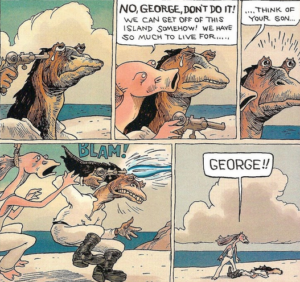 If you’re thinking that, that’s a little dark for a Star Wars comic, George survives only to become even more despondent when he realises that he left the only woman he ever loved to sire an heir and the end result was Jar Jar Fucking Binks. Which yeah, we totally understand.

X-Man heaven has a revolving door