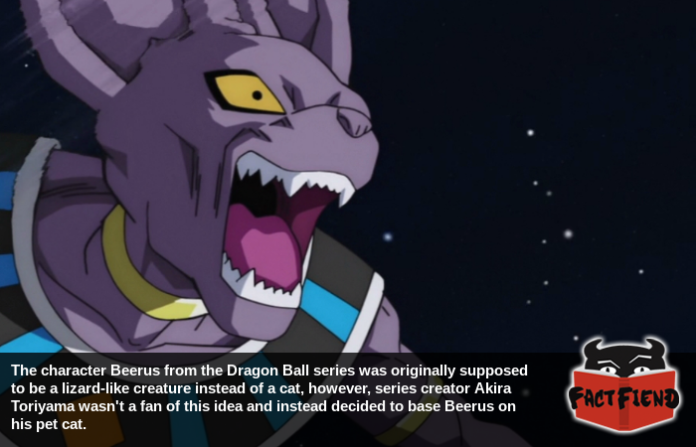 The Dragon Ball series is one known for introducing ever more powerful characters with every passing season. At the time of writing this arguably one of the most powerful is Lord Beerus, a being described as having near-limitless destructive potential who also happened to be based on cat.

First though, for anyone unfamiliar with the Dragon Ball series, Beerus’ immense physical might is directly related to his status as a divine being, specifically a God of Destruction. Described as beings who few, if any mortal, can best in one-on-one combat, Gods of Destruction are amongst the singular most powerful entities ever introduced in Dragon Ball. Dragon Ball being an anime, there have of course been characters noted as being on par with if not physically stronger than even literal gods like Beerus, for example, Jiren the Gray, who we only mention to point out how much he looks like an alien Dorito man. 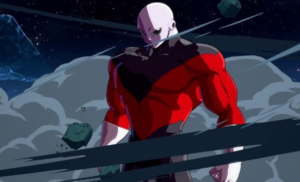 Moving on, the initial idea for Beerus’ first appearence in the movie Dragon Ball: Battle of Gods was for him to look like a lizard. However, when series creator Akira Toriyama came along to review these design ideas he immediately discarded them all and instead decided that Beerus, the literal strongest entity in the universe up to that point, should look exactly like his pet cat, Debo.

As for why Toriyama chose to make Lord Beerus look like his cat, besides that idea being fucking adorable, is that the cat was apparently very ill and Toriyama was told by a vet that it might not survive. When the cat miraculously pulled through without any medical assistance whatsoever, the vet reporteldy quipped that it might be a demon. A thought amused Toriyama and inspired him to base the design of a being of Beerus on his impossible to kill demon-cat.

The amazing thing about this though is that it isn’t the first time Toriyama has inserted his pet into Dragon Ball and then made it an uber-powerful being everyone else in the universe stands in awe of. You see, much earlier in the Dragon Ball series one of the most powerful characters was an immortal cat-god called Korin. 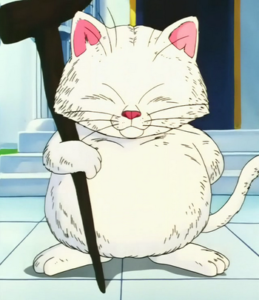 Now contrary to Korin’s diminuitive appearence, he was a pretty big deal upon first being introduced and is described in Dragon Ball canon as being a “god of martial arts”. Like with Beerus, Korrin’s appearence was inspired by Toriyama’s pet cat, in this case a much older cat he owned many years earlier. According to Toriyama, this cat slept all the time, which is the reason Korin’s eyes are similarly always closed. Whether or not the cat could do martial arts has never been revealed so we’re forced to assume that it could.