Neil Flynn will likely spend the rest of his professional career being known as “that guy from Scrubs“. Which is kind of fair considering that he owned the role of the Janitor on that show so hard they didn’t even bother writing lines for him.

The story goes that due to his background as an improvisational comedian, Flynn was able to come up with most of the Janitor’s more surreal one-liners, jokes and observations on the fly. With his own lines that he came up with 2 seconds of thinking time usually being funnier than the ones written for him in the script. 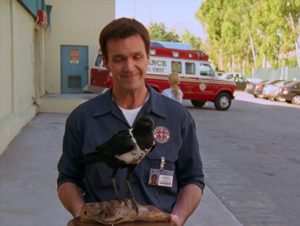 Over time and as Flynn became more comfortable in the role, the script writers slowly began giving him less and less direction and director Bill Lawrence gave him more freedom to go off script. According to Flynn, Lawrence let him do this because he liked to joke that he’d take credit for any line he came up with that was funnier than the one in the script anyway. This culminated scenes in the script in which the Janitor’s only direction was “Neil says something funny here” or “Whatever Neil says“, a level of trust Flynn appreciated and often took advantage of.

For example, a running joke throughout Scrubs is that nobody seems to know the Janitor’s name and the character is oddly coy about saying what it is to the point his own name tag just says the word “Janitor” on it. In recognition of how much of the Janitor’s persona was Flynn’s creation, he was given absolute authority to veto any suggestion for what the character’s real name was when it was ultimately revealed in the series’ supposed finale in season 8. Which makes it kind of disappointing that he settled on Glenn Matthews instead of Zanzibar Buck-Buck McFate, a name he teased to journalists when the season was still in production. Then again, making up a stupid name to annoy people does sound exactly like something the Janitor would so we have to give him props for staying in character like that we guess. 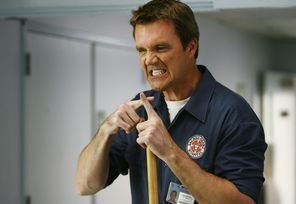