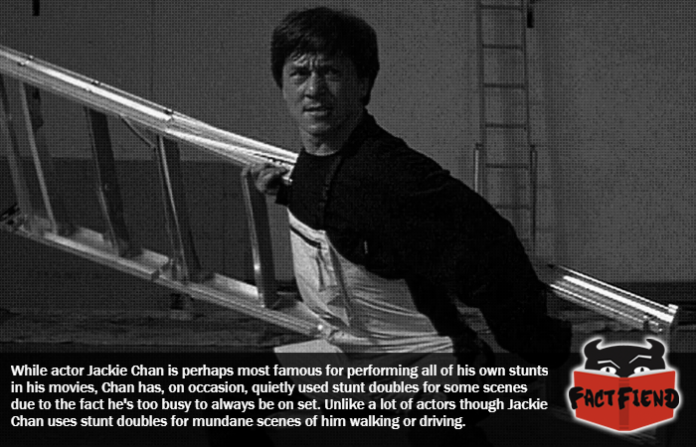 As a performer Jackie Chan is known for throwing himself headlong into danger like a suicidal lemming, risking life and limb to get the perfect shot. Although famous for always doing his own stunts, Chan has admitted to using stuntmen for something way more stupid, getting pickup shots of him driving his car.

You see for anyone who doesn’t know, for pretty much as long as he’s been in the industry, Jackie Chan has choregraphed and performed virtually all of the stunts seen in his movies, usually with minimal and in some cases, no safety equipment whatsoever. Because how are you supposed to enjoy a movie if the actor in it didn’t risk having 50% of their skin sheered off by the cold, unforgiving tarmac of a Hong Kong highway?

Something that has resulted in Chan being blacklisted by literally every insurance company on Earth. Not that, that matter because Chan has noted in the to avoid the headache of trying to insure his stunt team, aptly named The Jackie Chan Stunt Team, he has a standing agreement to pay all of their medical bills out of his own pocket if they get injured. In addition, Chan frequently trains with his team so that there is a level of mutual trust and respect between them. Which is kind of necessary when their job is to punch each other in the face for 8 hours per day. 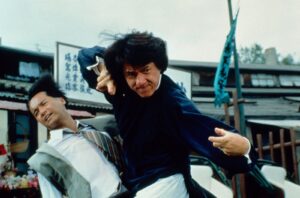 Curiously, despite The Jackie Chan Stunt Team arguably being one of the most competent collection of stuntmen and women on the planet, Chan has explained that Hollywood studios endlessly bitch at him that his stunts aren’t safe. To which he usually responds, well, yeah, that’s the kind of the point …

As if that wasn’t bad enough, according to Chan despite being one of the most celebrated stunt choreographers and performers in the world for over a decade before arriving in Hollywood, he still had to fight for control over this aspect of his early American films. Meaning the guy responsible for some of, what are generally agreed to be, the greatest stunts ever performed, wasn’t allowed to have input on the one thing he’s known for. An idea so stupid we can fully believe it came from the same people who reportedly shut Chan down when he suggested cutting scenes of him doing boring mundane shit from his movies because nobody was paying to see him do that.

Moving on, whilst you’d expect age or just the fact he’s now rich as fuck to stop Chan risking his life performing stunts, he has indicated that he plans to keep doing his own stunts for as long as he is able to. That said, Chan has revealed that due to his increasingly busy schedule, he employs the use of stunt doubles for pickup shots of his characters doing things like walking or driving. Meaning there’s a stuntman out there somewhere who is paid actual money to calmly walk from place to place or drive nice airconditioned cars around at a reasonable speed while the guy he’s standing in for takes over when it’s time to fight five burly dudes at once or be thrown through a plate glass window. Which admittedly, sounds like a pretty sweet deal.