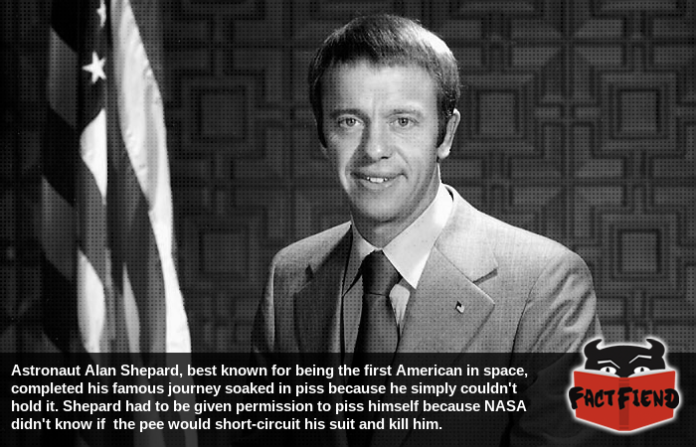 Astronauts are fucking heroes because there aren’t many other descriptors you can use to discuss men who willingly allow themselves to be sent screaming into the upper atmosphere strapped to billions of dollars worth of bleeding edge technology built by the lowest bidder. Not that space travel is without it downsides. We mean, just ask Alan Shepard a man whose historic first trip to space was marred by the fact he literally smelled like piss.

Something worth pointing out for people who may be wondering, astronauts can absolutely piss in space if they need to. In fact, this is pretty much a solved issue for current astronauts thanks to something known as the Maximum Absorbency Garment, known colloquially as a Space Diaper. Which, while funny and something we were absolutely going to mention, isn’t really accurate because the garment is described as being more akin to a pair of shorts. Albeit a pair of shorts capable of absorbing 400 times their weight in water before becoming damp. Which is, cool, we guess.

Anyway, while peeing in their space-pants isn’t an issue for modern astronauts it was absolutely a major issue for astronauts of the past, or at least it was when longer space missions became a thing. You see, early space missions were short enough where astronauts could just, well, hold it in. As such, NASA didn’t make any accommodations for when nature called. However, this all changed with the 1961 Freedom 7 mission and astronaut, Alan Shepard.

You see, Shepard was told that the mission, whilst momentous and earth-shattering in its importance to science, was going to be a relatively short and simple affair. As a result, Shepard reportedly spent his morning drinking coffee and orange juice in massive quantities.

However, numerous delays resulted in Shepard spending a bladder detonating 8 hours in his suit, with several of those house being spent sat on the launch pad. To his credit, Shepard was able to hold it for a couple of hours, but just minutes before launch radioed command with a problem. He needed to pee.

Shepard’s announcement reportedly sent NASA experts scrambling as they rushed to figure out a solution that wouldn’t kill either the mission or Shepard. A statement we need to clarify is not hyperbole because, as you might imagine, spacesuits are filled with all kinds of sensitive technical gizmos that don’t respond well to being pissed on. In fact, some of them were so sensitive that there was a genuine concern that peeing on them might short circuit the suit’s life support capabilities, killing Shepard.

An issue that was solved by temporarily turning off the electronics in Shepard’s suit. Even then, when the nervous astronaut enquired about the safety of relieving himself inside his suit, NASA experts were only able to say that doing so “probably” wouldn’t kill him. Which we imagine made for the tensest piss in human history.

Thankfully, Shepard was able to pee without issue, though the urine did end up short-circuiting vital sensors and made his suit smell like piss for the entire rest of the mission. A small price to pay though to be able to make the most accurate “to boldly go where nobody has gone before” jokes for the rest of your life.