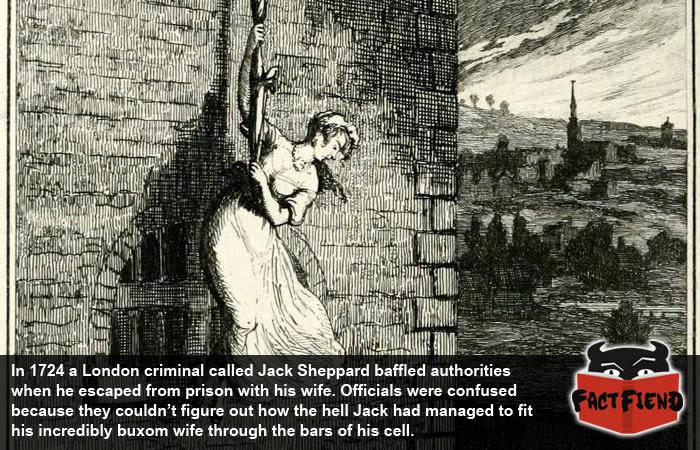 This article was recently turned into a video on our new YouTube channel and it contains a bonus story about the time I found an anatomically correct penis made of plaster in my fridge.

If videos aren’t your thing, check out the original text version below.

Normally we’d refrain from glorifying criminals here at Factfiend, but when we heard about Jack Sheppard and the time he baffled the police by escaping from prison with his inhumanely busty wife in tow, we were so impressed we had to write about him.

Before getting to the fun stuff though, lets talk a little more about just the kind of man Jack Sheppard was. According to every available source we consulted, Jack was actually on the path to a well-paying and respected career as a carpenter before he decided to screw that noise and become a criminal instead. And so, at the age of 20, Handsome Jack as he was known because of his ridiculous angular features began an illict affair with a local prostitute known to many simply as Bess and began robbing the shit out of every house in London sometime in 1722.

Over the course of the next two years, Jack committed hundreds of robberies and escaped from jail no less than 4 separate times  using nothing more than guile and a complete disregard for the amount of fucks it’s possible for one human to not give. As with most dashing rogues of his era, Jack eventually pushed his luck too far and in 1724, he was captured, tried and hung for his many, many crimes.

Although Jack is famous for escaping Jail and the hangman’s noose four times before the law finally caught up with him, today we’re just going to focus on his most famous escapade, the time he escaped prison with his wife, Buxom Bess.

The story goes that Jack was arrested in 1723 for pickpocketing and sent to one of London’s many prisons, while in prison Jack was visited by Bess whom authorities recognised as his wife and threw into the cell with him. Luckily for Jack, his wife just so happened to be in possession of one of the largest sets of breasts in the city and when the two of them were visited by a friend of Jack’s the next day, she was able to slyly hide a file, a chisel, two drills and a knife that was passed to her through the bars in the folds of her cleavage while Jack distracted the guard who was amazingly not completely entranced by a set of breasts large enough to hold the contents of a toolbox.

When night fell, Jack was able to use the tools and remove the bars from the cell window, at which point he used the knife to begin cutting off Bess’ clothes in small strips, which he then tied together with his bed sheets, creating a crude length of rope. But here’s where things got complicated, Bess’ ample bosoms meant that for her to even fit out of the window, he’d need to remove all of the bars from the cell window, which meant he had nothing to anchor the rope to. With no other option available, Jack was forced to lower Bess himself. It’s at this point we’d like to mention that Jack himself was only 5ft 4 inches tall and when his empty cell was discovered, the police initially didn’t think he had the upperbody strength to physically lower his wife and her heaving chest to the ground.

After somehow managing to do exactly that, Jack climbed down and let out what we can only assume was an ungodly groan when he turned his head and saw that there was still a 20 foot high wall between them and freedom. Unwilling to leave that much woman behind, Jack scaled the wall and lowered the rope for Bess to grab onto, then using all of his strength he was able to pull her the entire way up the wall without alerting anyone. Then when she reached the top, he dropped the rope for a final time and lowered her to the ground again. With the heavy lifting out of the way, Jack stripped naked, threw all of his prison clothes into the yard and effortlessly made his way to the ground so that he and Bess could escape together.

Initially news of Jack’s escape elicited a fairly muted reaction, that was until the authorities made it known that his escape had involved and half naked woman with huge breasts being lowered from a window by a tiny soon-to-be-naked man.

As much as we’d like to laugh at the media of the time for glorifying what was essentially, a bad man escaping from jail, we can’t shake the feeling that if something like this happened today, you’d see it on the front page of Buzzfeed for weeks.