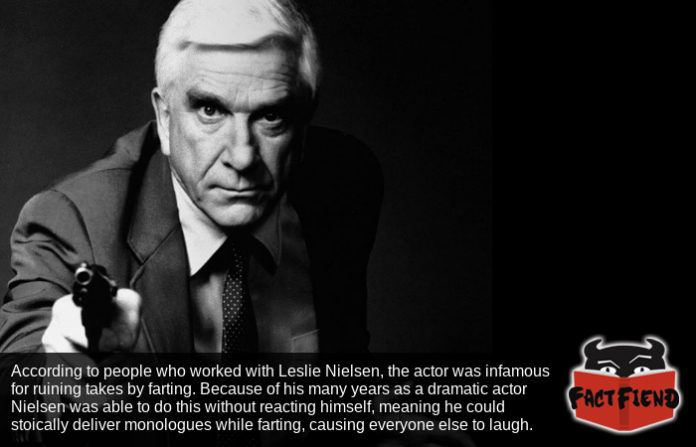 Leslie Nielsen was a comedic juggernaut who appeared in more movies than the MGM lion and was probably just as intimidating to be around. This wasn’t helped by the fact that Nielsen had a peculiar habit of purposely making things awkward by farting.

Nielsen was a curious figure who, despite being best known for his appearances in numerous spoofs and comedies, started his career as a serious actor and was even, for a while, considered to be quite the sex symbol. 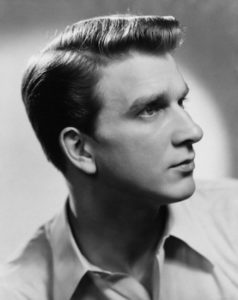 This in of itself proved to be a paradoxical element of Nielsen’s personality as the actor always maintained that he was destined to be a comedic actor from the very beginning and people who knew him best report that he was just as goofy as his later on screen performances. In other words, the version of Nielsen seen in the Naked Gun series was closer to the actor’s actual personality than any of his earlier roles.

However, Nielsen was still a professional and he spent decades honing his craft as an actor to the point it’s reported little, if anything could distract him. In fact, this is one of the reasons Nielsen was cast to appear in Airplane!. You see, the directors of that film only wanted to hired actors known for their dramatic roles and told them to deliver every line, no matter how absurd, completely straight. Why? Because they thought it’d be funnier that way.

Nielsen in particular was praised for his ability to deliver any line given to him with the utmost seriousness and an unflappable, deadpan facade while somehow making it funny. This would later become a hallmark of Nielsen’s acting and something he’d perfect during the last 3 decades of his career.

Nielsen was keenly aware that he was often the only person on set who’d be able to keep a straight face and enjoyed taking advantage of that fact to ruin takes. Apparently one of Nielsen’s favourite pranks was to fart loudly just as he finished saying something profound and then stare intently at whoever he was with as if in deep thought. More often than not, this would cause the other person to completely lose it.

Nielsen loved doing this so much he had a prop guy on one movie he was working on make him a small device that when squeezed just right did nothing but make loud, realistic fart noise. Nielsen supposedly carried this thing with him all the time and would even use it during TV interviews just to mess with the host. Hell, one time he used it so much while taking a flight that he got kicked off the fucking plane!

Actors who starred alongside Nielsen noted that even when he didn’t have his trusty fart maker he could still ruin takes by just saying his lines. For example, while filming the Naked Gun series, actress Priscilla Presley who starred alongside him once asked directors how in hell she was supposed to maintain a straight face when talking to Nielsen. In particular, she had no idea how to not crack the fuck up in response to the actor matter of factly telling her, “Nice beaver!“.

It’s rumored that one of the reasons Presley stays off screen so long in that scene is because she couldn’t stop laughing whenever she saw Nielsen’s face and had to take a second to compose herself. Then again, maybe she just wanted to give Nielsen a moment or two to really appreciate that beaver.