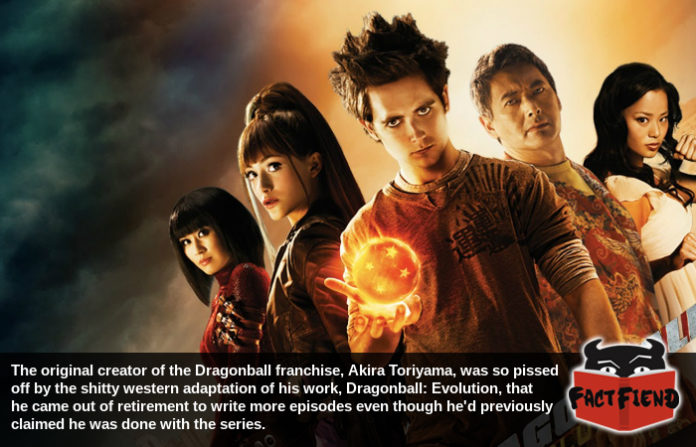 Dragonball Evolution was a flaccid, soulless, live-action re-imagining of a beloved Japanese property. It was mauled critically, flopped harder a whale having a seizure and is kind of responsible for reviving the entire Dragon Ball franchise.

For anyone who hasn’t seen it, it’s really hard to do justice just how bad this movie was. Like the Saiyan warriors the series follows the story of, the movie transcended beyond the limits of sucking wang people thought possible. Along with being cheaply made and badly directed the movie somehow made a story about martial artists who can scream so hard they learn to fly and fire bolts of planet destroying energy out of their hands, kind of boring.

The movie was made without a hint of a shit being given about the source material, something we know because the guy who wrote the screenplay issued a formally apology for it 2016. In their rambling apology the writer paradoxically admits to trying as hard as they could to make the movie awesome while also admitting to the fact they “went into the project chasing after a big payday”. Which translated to English basically means “I didn’t realise these nerds would care so much about me shitting all over this several decade old franchise they grew up with”.

Along with being savaged by fans and critics, the original creative mind behind Dragon Ball, Akira Toriyama, hated it too, mostly because nobody working on it would fucking listen to him. In a 2015 interview, Toriyama noted that not a single person helping to create the live-action adaptation of the thing he created would listen to any of his suggestions, instead charging ahead thinking they knew the series better than the guy who’d worked on it for 2 decades. The artist felt that because of this, the end product was disappointing, and most sadly of all, not something he could call “Dragon Ball”.

However, rather than being bummed about the Hollywood holding open their assholes and dropping cannonball-sized deuces all over his beloved creation, Toriyama instead got pissed. In fact, Toriyama would later note that prior to the release of Dragonball Evolution (we just noticed that the hack fartknockers who made this movie didn’t even put a space between dragon and ball in the title, like did they even watch a single episode?) he had all but put Dragon Ball behind him.

However, the movie left such a sour taste in his mouth that he decided to write one more story, Dragon Ball Z: Battle of Gods. This movie ended up giving the franchise a much needed shot in the arm, revitalising interest in Dragon Ball and prompting Toriyama to decide to write another movie. This movie, Dragon Ball Z: Resurrection ‘F’, was again incredibly well received and proved that there was enough interest in the franchise to maybe continue where the original series had left off 18 years ago! This led to the Toriyama writing Dragon Ball Super, a direct sequel to Dragon Ball Z that not only continued the mainline story, but gave fans the thing they’d been asking for, for over a decade. Footage of Krillin kicking some ass.