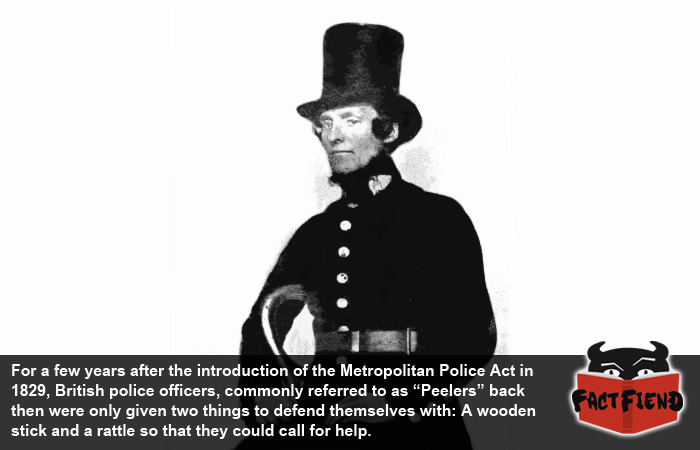 We currently live in an age where police officers can regularly be seen driving around in fucking tanks, which is both unnecessary and kind of terrifying. So today we wanted to tell you about a simpler time in history when British police officers were armed with nothing more than sticks, rattles and rock hard top hats.

As noted in this article on the history of the Metropolitan Police Force, when Sir Robert Peel first pushed through the Police Act in 1829, he made sure to deck out the thousand or so police officers hired to protect London in the most pimp-ass uniform he could find. Going as far as to state that they all officers had to wear a freaking top hat whenever they were on duty. Far from being just for style, the top hat was hardened to such a degree that it could both protect the wearer from punches to and/or 6 inches above their head and it was sufficiently strong enough to function as a makeshift step whenever an officer needed to peer over walls.  It also looked fly as balls.

The reason Peel made his officers wear top hats instead of something a little more practical was because he was very keen to differentiate officers from military personal, so much so that he insisted that their uniform be blue just to differentiate it from a British army uniform (which was red at the time) as much possible.

Because he wanted the police to be distinct from the army, Peel was hesitant to issue officers with any sort of weapon, feeling that doing so would make them less approachable and appear intimidating rather than comforting. However, he also understood that officers would invariably need to defend themselves so after much deliberation he came to the decision to issue officers with a truncheon and a wooden rattle. The truncheon was to be used by officers as a last line of defence in the event of attack while the rattle was given to officers so that they could signal for help, which we’re assuming happened all the time because they were being asked to apprehend criminals armed with knives and guns while looking like pimps on their way to a funeral.

Eventually the government saw sense and realised that police officers needed a way to defend themselves that didn’t involve waving around a big wooden rattle like an exceptionally well-dressed toddler and in 1884 the rattles were taken out of service and replaced with whistles. The weird thing is, officers were also issued with a fucking sword when they joined, but weren’t allowed to carry it around unless it was an emergency.

But the important thing to keep in mind here is that for a brief, but fabulous time in British history, all of the police officers in London walked around wearing top hats while waving huge rattles to scare away criminals.