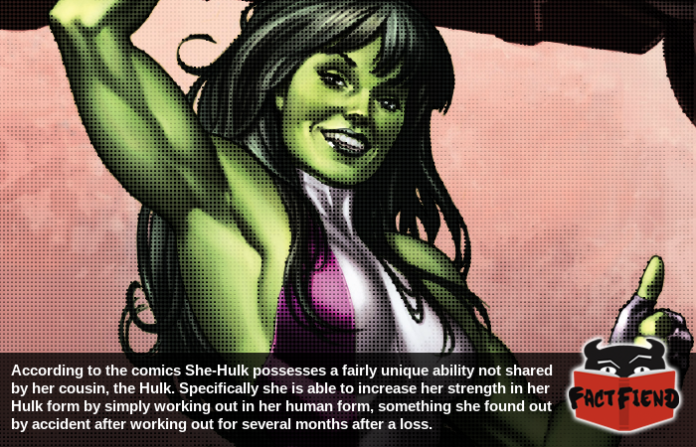 She-Hulk is a comic character capable of some extraordinary feats of physical prowess. While admittedly her strength pales in comparison to that of her cousin, she does possess one skill the Hulk does not. The ability to increase her strength exponentially simply by working out.

Now exactly how strong She-Hulk is tends to vary from the comic to comic, though some incarnations of the character are noted as being strong enough to effortlessly best the likes of Hercules. A character she once threw an arm-wrestling contest with to spare his feelings before fucking him senseless and leaving him stranded in a parking butt-ass naked.

Not being one to take that sort of thing lying down, She-Hulk, using her legal expertise, poured over the terms of her bout with Champion of the Universe and discovered an obscure loophole that allowed her to request a rematch in three months time. Because oh yeah, for anyone who didn’t know, She-Hulk is a lawyer who – and we’re not making this up – goes to court in her She-Hulk form to deliver legal beat-downs to criminals. 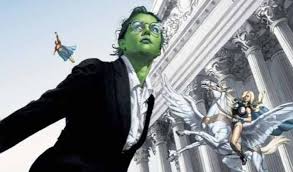 The thing is, She-Hulk’s powers differ from those of the Hulk in that her base strength level is fairly consistent. While her strength can fluctuate with her emotional state like the Hulk, it does so to a much lesser extent. This left She-Hulk in a somewhat odd situation as she had no real way of preparing for her rematch, resulting in her simply working out in her base, human-form to help with her confidence.

What She-Hulk didn’t realise though is that, unlike the Hulk whose strength is derived solely from his emotional state, her strength is proportional to her strength whilst in her human form. This came as a shock to She-Hulk when she transformed for her bout and realised she was now strong enough to punch Champion of the Universe’s dick off. 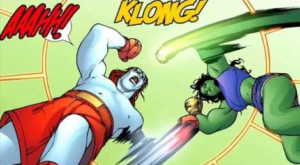 In fact, She-Hulk ended up being so strong in this new, powered-up form that following this bout she had to take to wearing a suit specifically to limit her power because she was too strong.