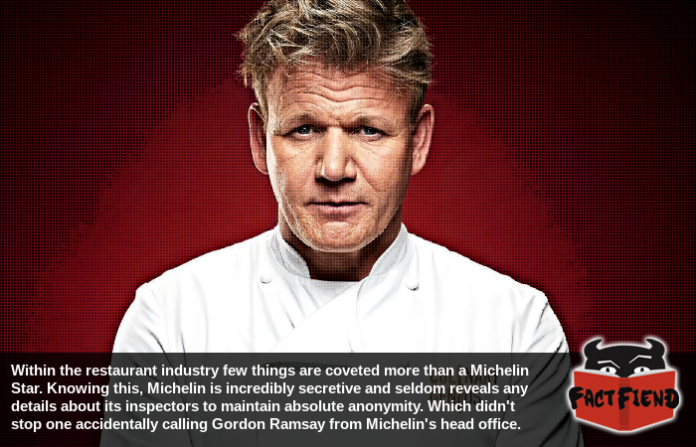 To the restaurateurs and chefs of the world there are few things held in higher esteem than the Michelin Guide. Published once a year and considered to be the guide to good food, Michelin maintains an almost comical degree of secrecy when it comes to their inspection process. Which didn’t stop Gordon Ramsay immediately spotting a Michelin inspector in the late 90’s.

First though, for anyone curious who may not be familiar with the Michelin Guide, yes it is funded and published by Michelin, the tire company. A fact that kind of make sense when you look at the company’s mascot and realise what a wobbly piece of shit he is.

So why do a tire company of all things publish a guide on food? Well the story goes that the company first decided to publish the guide in 1900 in France as a way of getting some of the 3000 or so motorists on the road back then to drive more. The idea being that the guide would encourage people to drive and see more of the country and hopefully, in the process, wear the shit out of their tires.

Since then the guide has become the foremost directory of food in the entire world. A status Michelin takes incredibly seriously, pouring an ungodly amount of money into training an army of inspectors who travel the globe reviewing the best restaurants in the world.

To ensure they aren’t given special treatment or anything like that, Michelin inspectors aren’t allowed to reveal what they do to anyone, with many being advised not to even tell their own family. Further, Michelin inspectors often work in pairs, posing as couples, friends or business partners and will frequently employ the use of aliases so that they don’t get rumbled.

So determined is Michelin to ensure absolute anonymity for its inspectors that there are higher-ups at the company who’ve sheepishly admitted to never meeting one despite the fact they pay their wages.

With all that in mind consider a story recounted by Gordon Ramsay who managed to somehow circumvent all this secrecy and immediately spot a Michelin inspector and prepare for their arrival. How? Well for some, inexplicable reason said inspector decided to call his restaurant from Michelin’s headquarters in France. Something Ramsay’s maître d’, a Frenchman and veteran of the industry, noticed when taking the booking allowing Ramsay to slyly stack the odds of winning a Michelin star in his favour. For example, Ramsay made sure the inspector got double-sized portions of all their food, disguising this fact by giving the tables next to the inspector the same portions to disguise this fact. Not that it helped since Ramsay didn’t win a Michelin star that year, though it’s still kind of hilarious how quickly he spotted a person who’s literal job was to not be noticed or recognised.