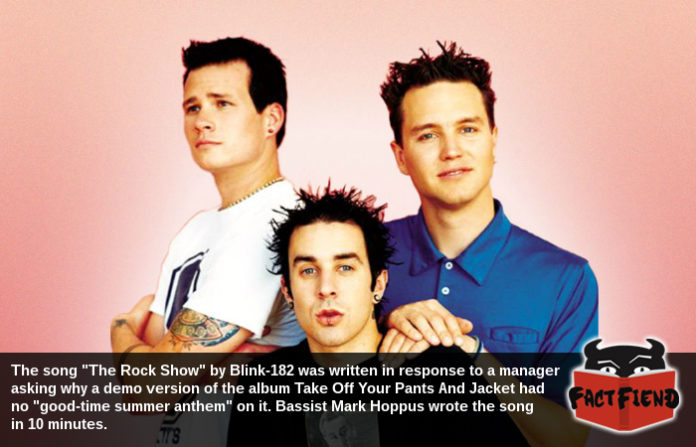 Blink-182 is a band known primarily for a few things, their sense of humor, their stupid music videos and that time they were almost sued for violating the Geneva Convention. Today we’re here to talk about that time the bassist and guitarist each wrote one of the band’s greatest hits in 10 minutes each.

The story starts with the release of the album Enema of the State, which like one of King Midas’ turds immediately went gold and later, multi-platinum. The success of the album proved to be a major stumbling block for the band because their record company expected a similar sized hit just a few months later. When the record company threaten to backhand the band with a massive fine for not delivering an album in time for a quarterly review, Blink happily took the hit to their wallets because they didn’t feel comfortable just squirting out an album and coasting on the success of their earlier work.

Instead Blink holed up in the same studio they’d recorded Enema of the State and penned a number of songs they felt best suited a new, heavier direction they were heading in. During the writing process a competition of sorts began between bassist Mark Hoppus and guitarist Tom DeLonge where they’d compete to see who could write “the better chorus, the cleverest lyrics”, something masterfully demonstrated by the song, I Wanna Fuck a Dog in the Ass.

After a tentative album had been completed the band invited their manager to listen to an early demo copy, making him the first person outside of the studio to hear any of the follow up songs to an album that had sold like 4 million copies. According to Hoppus and DeLonge their manager listened intently to the entire album before slowly opening up his asshole to shit all over it. The manager did that slimy executive thing where he told the band he loved the album, but felt like it needed a song they could package as a single.

Both DeLonge and Hoppus were rightly all kinds of pissed that the album they’d poured their heart, soul and desire to fuck dogs in their asses into with the latter being reported as saying:

Both men then drove home and wrote the most obnoxious, generic single they could in “about 10 minutes”. What were those songs you ask? Well DeLonge wrote First Date and Hoppus wrote The Rock Show, AKA, the most popular songs the band have ever written. As if writing two hit songs in 10 minutes just to show that they could wasn’t enough of a fuck you to the record company, when the band was asked to make a video for The Rock Show, they took the money and filmed themselves throwing it all away.

The lesson here being, record company executives are always right but fuck them regardless.