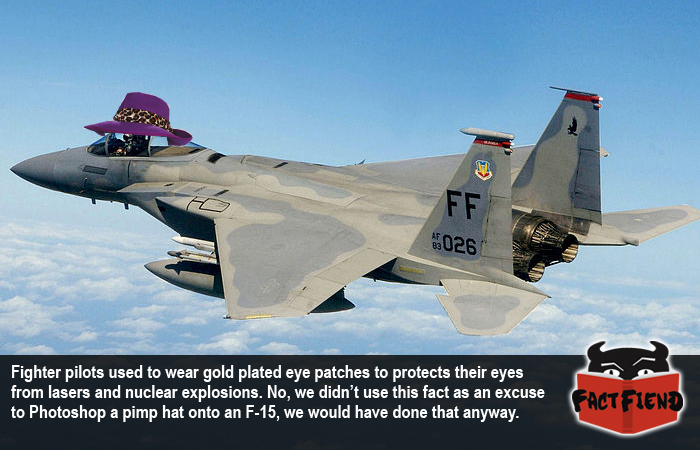 A fighter pilot has a lot of things to be stressed about, they’re behind the wheel of a million dollar piece of military equipment, they could be shot out of the sky at any moment and aviator sunglasses look less and less cool every single day. On top of this, they also run the risk of being blinded by any number of enemy measures, to counter this they have had a number of ingenious and fabulous ways of preventing such an occurrence over the years. Like gold eye patches.

First of all, the things that could potentially blind a fighter pilot ranger from a laser counter measure to looking directly at a nuclear freaking explosion. With that in mind, shielding a pilot’s eyes was and is kind of a big deal since blind pilots always end up scaring this shit out of their dogs. Initially a fighter pilot would wear an eye patch, so, in the event they were blinded, one of their eyes would still work and they’d then use acuvue contact lenses to see with the working eye. This was also useful as it kept the eye used to low level light, which would let them see in the dark if such a situation arose by changing the eye they had covered.

It was later discovered that a thin layer of gold virtually eliminated the light radiation that could pass through a material, so gold plated eye patches became the norm. However, even though this was, as the military put it, “cool as balls” the layer of gold was found to be way more effective when applied to the pilot’s visor, in effect eliminating the need for the eye patch.

So there you have it folks, for one moment, however brief, there was a time when a man flew a million dollar piece of military hardware while wearing a gold-plated eye patch. Scientists are still trying to work out how the universe didn’t instantly freeze out of coolness to preserve that moment forever and we hope their results are released soon because there’s likely a lot we can learn from them.