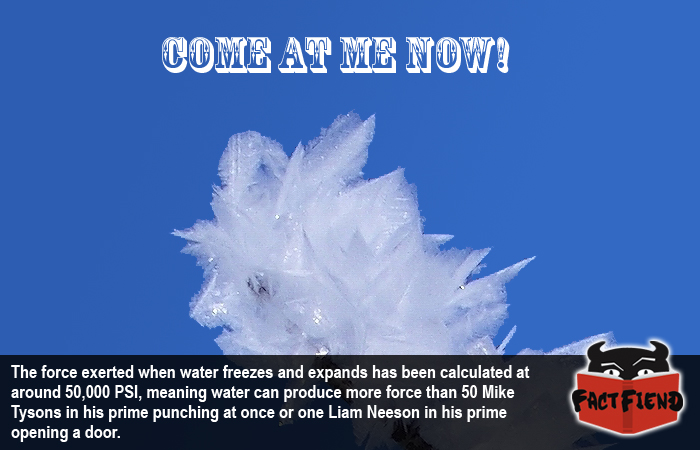 Unless you’re a large boat or Scorpion from Mortal Kombat, ice probably doesn’t scare you. Sure you could slip on it or accidentally thaw out an angry caveman trapped inside it, but for the most part ice isn’t something most people think is badass. Which is stupid since it can straight up break steel like Superman ripping through a chastity belt.
As you’re likely well aware when water freezes and becomes ice, it expands. What you’re likely not aware of however is the exact amount of force produced when this happens, this is because usually you only see ice form in a place it is free to expand, like an ice-cube tray or the excuse your ex-girlfriend calls a “soul”. When water is trapped though, it turns into what we can only describe as Wolverine from the X-Men in element form.

If put into an airtight container when it freezes water will virtually always find a way to break out, if it can’t forcibly break the seal of whatever it is trapped inside it will literally tear through whatever is stupid enough to try and trap it. For example in the past water has been observed shattering cannons made from cast iron and has been known to split rocks nearly in two.

In one particularly hilarious example of man trying to best nature, a guy tried sealing water inside artillery shells seemingly unaware that giving water a weapon was only going to help it learn how to best kill us when we finally invent the robot suits from Pacific Rim to punch the ocean. What happened was the water built up so much pressure as it froze it launched the solid iron stopper keeping it trapped nearly 500 feet through the air.

The exact amount of force water is capable of exerting is, as the image above states, close to around 50,000 PSI. However, if you managed to trap water in a container capable of surviving this amount of pressure it would simply turn into a denser, more badass and lesser known form of ice called Ice II, apply more pressure and it’ll turn into Ice III and so on and so on until you have Ice XV which is so rare and difficult to create scientists need acid and lasers just to make it without calling Chuck Norris. In other words, if you try to trap ice it just levels up and gets even stronger until science stops understanding its power.

We always knew Dragonball Z was trying to warn us about something.