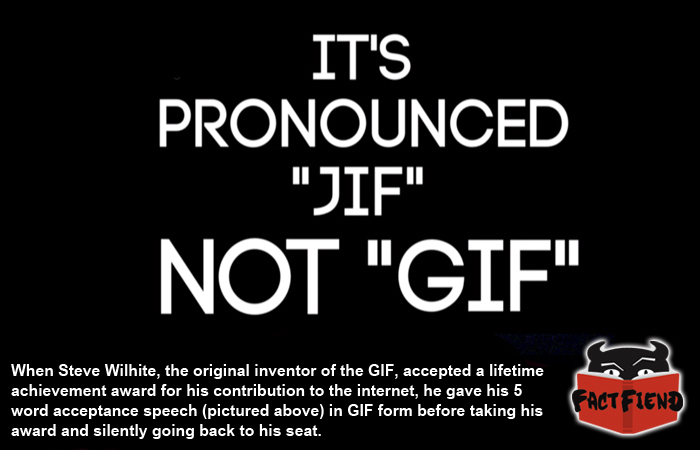 The pronunciation of the word GIF is probably one of the most explosive and contentious topics online trailing only behind the concept of tipping and whether or not it’s okay to harass women online. Which is odd, because the guy who invented the GIF has already conclusively stated that its pronounced “JIF” with a soft, flaccid and yet some how noble G and nobody listened to him.

According to the original inventor of the GIF, Steve Wilhite, anyone who pronounced the word GIF with a hard G is basically a fucking idiot and he’s even gone as far as calling out the dictionary for suggesting that both pronunciations are acceptable, simply stating “they are wrong, end of story.”

In interviews, Wilhite has noted that when he was inventing the GIF, the team he worked with always pronounced the word with a soft G, as a nod to the popular brand of peanut butter, Jif, adding that nobody on his team ever pronounced it the other way, presumably before mumbling under his breath that he would have ferociously slapped anyone who did across the mouth. However, when the file format started to become popular online, thanks to the fact it lets people do things like post an brief animated clip of Optimus Prime dunking on a Decpticon to break up a block of text …

People began to assume that word was pronounced with a hard G because, well, the G in GIF stands for Graphics which is, oddly enough, also pronounced with a hard G. Over time this assumed pronunciation became the norm, which rightly annoyed the shit out of Steve Wilhite who soon found himself being corrected on the pronunciation of the thing he invented by kids and teenagers whenever he spoke to them about his most famous contribution to computing and the internet. Just as an FYI for anyone reading, at Factfiend it’s our official policy to always side with the man who allowed us to embed the above image in our article, now and forever.

This prompted Steve to set the record straight once and for all at the 2013 Webby awards, (think the Oscars but for the internet, so a bit sadder with a laxer dress code) at which he was set to earn a lifetime achievement award for his creation. After being called up to collect his award, Steve slowly shuffled towards the stage and gave the nod for the following GIF to be played.

Upon seeing this heartfelt plea from an elderly man asking for people to refer to his creation in the way he’d originally intended, people across the web collectively got together to say “that’s cute, but allow me to lecture you on why you’re wrong while treating you like a moron. Also fuck you.”

Following Steve’s appearance at the Webbys, thousands of people Tweeted saying that he was wrong and online writers practically fell over themselves trying to be the first to smugly denounce Steve as a dumbass for thinking he had any agency in the pronunciation of a word that wouldn’t exist without him because more people think it’s pronounced GIF than JIF and the majority is always right in every situation and always had been throughout history without exception.

So, instead of everyone agreeing to humor an old man to make him feel better and begrudgingly admitting that maybe, just maybe, we were wrong and Steve was right about the thing, and we cannot stress this enough, he invented, for 1 week the internet was filled with headlines like this:

If you’re still with us, why not read about how a bunch of dickhead college kids interrupted a lecture from Raymond Bradbury about Farenheit 451 to tell him that his interpretation of his own book was wrong.