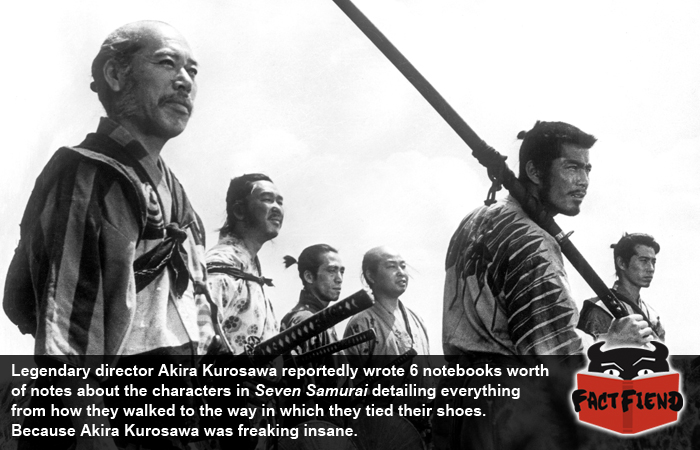 The beauty of talking about Akira Kurosawa is that even if you don’t think you’ve seen one of his films, you’ve seen one of his films because Hollywood has been ripping them off for as long as he’s been making them. But we’re not here to talk about that today, we’re here to talk about how utterly insane Kurosawa was when it came to the little things.

Kurosawa’s dedication to authenticity in the films he produced is legendary and there are tens of dozens of stories out there about him making some absurd demand of his staff or cast in the name of getting a particular shot just right. For example, as noted in the image above, when he was writing Seven Samurai, which inspired The Magnificent Seven, Kurosawa filled half a dozen notebooks with notes detailing every little thing about the films eponymous samurai and then gave them to the principle cast to study. Why he didn’t just fill up one notebook per samurai is a testament to how few shits Kurosawa gave about making people’s lives easier if it interfered with his vision.

The notebooks allegedly contained virtually every piece of information the actors could possibly need and some that was must have seemed like Kurosawa was taking the piss. Along with containing vital information like the Samurai’s name and motivation, Kurosawa also, for reasons only known to him, wrote how each of the samurai talked, tied their shoes and interacted with other people. If you think that’s insane, Kurosawa also insisted that the 101 extras he hired to play the villagers in the movie lived as the families the script called for, for the duration of filming so that they’d make more believable families on screen. It’s at this point we should probably note that this film went wildly over-budget and nearly bankrupted the studio who funded it. If you think we’re being remotely hyperbolic about this, you can see a small selection of Kurosawa’s painstakingly detailed character write-ups in this video of someone casually flicking through a book filled with scans of his original notes.

An even more ridiculous actual request that Kurosawa actually made in his lifetime happened on the set of the film Red Beard, during which characters were intended to drink from an ageing set of tea cups. Initially someone suggested painting the cups, but Kurosawa didn’t think that would look convincing enough so instead he simply made a member of his crew pour 50 fucking years worth of tea into them. During the same film he also insisted that the drawers on set were filled with pills and period accurate medical instruments (since the film was set inside of a hospital) even though none of the drawers were ever opened on camera.

Kurosawa would also insist that actors in his samurai movies wore their clothes for weeks before shooting actually commenced so that they’d look appropriately worn and used and once had his crew remove some guys roof because he didn’t like the way it looked in his shot. He later put the roof back, but that doesn’t change the fact he once stole someone’s roof to get a better shot in one of this movies. There’s even a (probably false) story circulating around online that Kurosawa once demanded that his crew make a stream flow backwards, presumably just to see the looks on their dumb fucking faces.

The sad thing about this is, Kurosawa is pretty much considered one of the greatest if note THE greatest film-maker of all time and yet none of the filmmakers who decided to rip off his movies, decided to rip off the methods he used to make them. Which is a shame because we’d honestly love it if more directors made impossible demands of their cast and crew just to screw with them, if only because we’d never run short of content again.