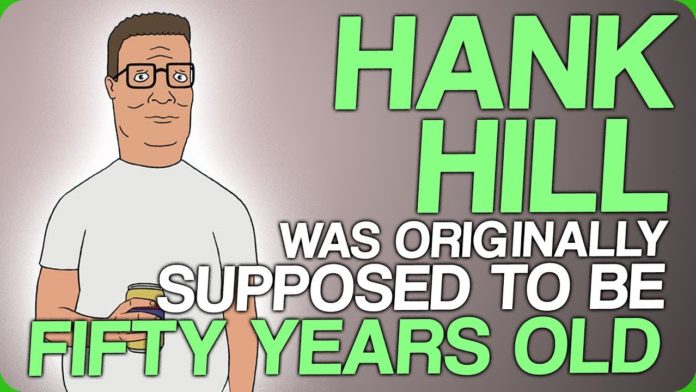 Hank Hill is the quintessential straight guy of animated sitcoms, a guy who is most at home selling propane and propane accessories  rather than engaging in the crazy adventures that seem to befall other animated sitcom dads on a near daily basis. Part of that may be due to the fact that Hank was originally supposed to be about 50-years-old.

We should point out that this early, almost geriatric version of Hank Hill looked virtually identical to the version we know, love and make memes of today because no changes were made to his design to make him look younger. To explain, when the creator of Hank Hill, Mike Judge first drafted the character, he envisioned him as being about 50 years of age and said as much in the pitch he sent to Fox.

However, just a few weeks later Judge got a snooty phonecall from a Fox executive very matter-of-factly explaining that Hank would be a much better character if he was closer to 30 years old. Why? Well according to that executive, the average age of a Fox viewer at that time was 31 years of age, so they felt that if Hank was closer to that age, the audience would better relate to him. Seemingly completely oblivious to the fact that Hank was a Texan whose primary interests involved drinking beer, eating meat and talking about how great America was. Shit, Hank could have been 120 years old and made of shark leather and he would have still connected with Fox’s audience with interests like that.

But we digress, according to Judge, this phonecall really pissed him off because at the end of the day, Hank was just a fucking drawing, who gave a shit how old he was? Hell, technically Homer Simpson is like 60 years old (though canonically he’s 40) because his character was alive and doing crap in the 60’s and people love that guy.

To prove that the executive was full of shit, Judge walked back into the office the next day and submitted the exact same drawing of Hank Hill with a note saying “okay, he’s 34” and Fox never mentioned it again.

For more cartoon facts, why not read about why the Simpsons are Yellow. Or not, we’re a website, not a cop, you don’t really have to listen to us.