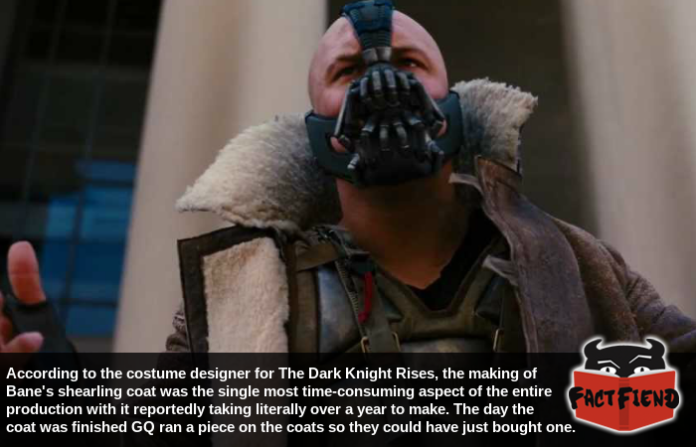 Bane is a character best known in the comics he hails from for snapping Batman’s spine like a carrot being dropped into a blender and his most recent live-action appearance for rocking the shit out of a shearling coat. A coat that took longer to make than almost anything else that appears in the film.

Said coat is worn by Bane whenever he isn’t silently radiating an aura of power with The Arms. 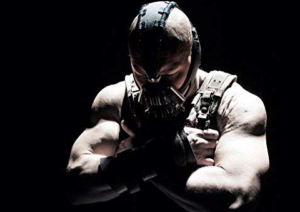 Described by the designer as a cross between a “Swedish army jacket and a French Revolution frock coat”, the coat was the culmination of around a year of work and almost drove the designer insane due to a lack of appropriate materials. You see, around the time the film was being made shearling coats weren’t “in” and as a result, nobody in or around Los Angeles knew how to work with with the materials used to make them.

Now while you’d think the coat was designed just to look cool, a lot of thought was put into it with designer Lindy Hemming noting that the idea behind the coat was that it would make Bane look equal parts “dictator and revolutionary” with a little bit of showy dickhead thrown in there for good measure. 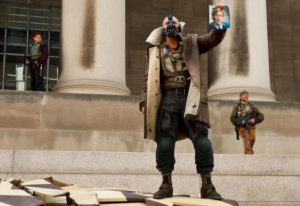 Due to the aforementioned lack of materials and people capable of working with them, along with multiple redesigns to make the coat look just right, meant that it took well over a year for Hemming to get it finished. For reference, during the same amount of time the prop department were able to design and build the flying Batmobile Batman flies through the city at Mach 3. 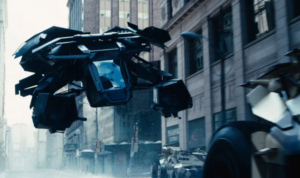 Here’s the funny thing though, according to Hemming immediately after a year of dicking around trying to get Bane’s coat to look exactly the right amount of swag, GQ magazine ran a piece on shearling coats declaring that they were that years hottest look. A statement echoed by other fashion magazines and bloggers that resulted in LA being lousy with shearling coats, many of which ended up looking almost identical to the one Hemming had spent a year painstakingly making from scratch.

A fact Hemming was keenly aware of, wryly noting in an interview with GQ that she could have probably just took a year off, bought one and then made some alterations so that it didn’t upset, The Arms.