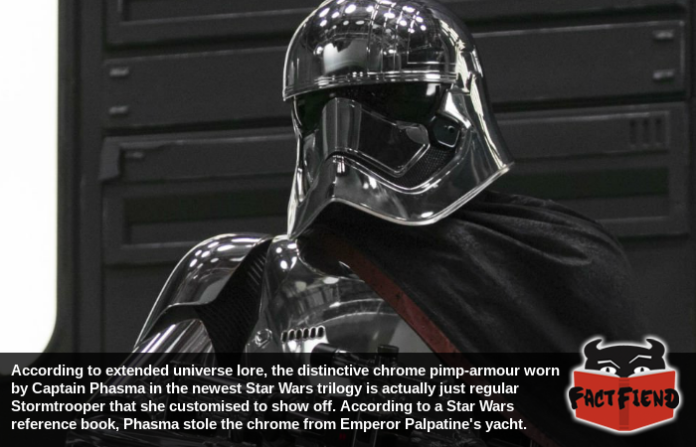 Captain Phasma is the the Boba Fett of the most recent Star Wars trilogy, in that she’s a character who exists seemingly just to stand in the background of shots. A fact supported by Star Wars reference material that notes Phasma’s distinctive chrome armor serves no real practical purpose beyond looking cool.

You see, according to the literary equivalent of a sarlacc pit known as the Star Wars extended universe, Captain Phasma’s armor is literally just regular stormtrooper armor that has been covered with a metal known in-universe as chromium. A fact that is more noticeable when you look at a photo of Phasma stood next to a regular stormtrooper.

According to extended universe materials the only real differences between Phasma’s armor and the standard-issue colgate white armor of a common first order foot-soldier are a few alterations Phasma made to her gauntlets to make strangling people easier. No, really. Save for this, the only other real difference between Phasma’s armor and a regular stormtrooper’s is a cape denoting her rank. This said, the armor is apparently slightly more resistant to blaster fire, which makes sense considering she’s basically a glowing chrome target on the battlefield.

Now various pieces of extended universe media have established that Phasma fucking loves wearing her armor and that she pretty much never takes it off while on patrol. Partly because she enjoys how it allows her to be judged by her rank and reputation rather than her gender and partly because she thinks it looks baller as fuck.

We know this because in a novel simply titled Phasma, it is revealed that after joining the First Order and receiving her armor, she made a beeline for her home planet of Parnassos, a cruel and barren planet notable only for being an irradiated shithole. According to the novel Phasma returns to her planet solely to track down an old ship she witnessed crash landing on Parnassos during her youth. As you might expect given how much people shit themselves whenever she appears behind them mysteriously in a doorway, Phasma kills like 40 people on her way to the ship and a bunch more on her way back.

The thing is, the ship Phasma is seeking out isn’t just any ship, it used to be the personal sex-yacht of none other than Emperor Fucking Palpatine.

In fact, this is partly the reason why Phasma seeks out the ship is because she believes it represents the “past power” of the empire. After ripping the ship apart with her bare hands in full armor Phasma drags the pieces of it to a machine lab capable of replicating anything, into which she puts her stormtrooper armor.

After a couple hours Phasma has a new set of pimpin’ chrome armor that she openly admits looks kinda baller. Hell, literally the first thing Phasma notices is that the cape she likes wearing swishes across it in a more satisfying way. Or to put it another way, Phasma punches a space-yacht apart with her bare hands purely to pimp out her standard-issue stormtrooper armor. 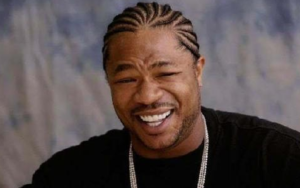