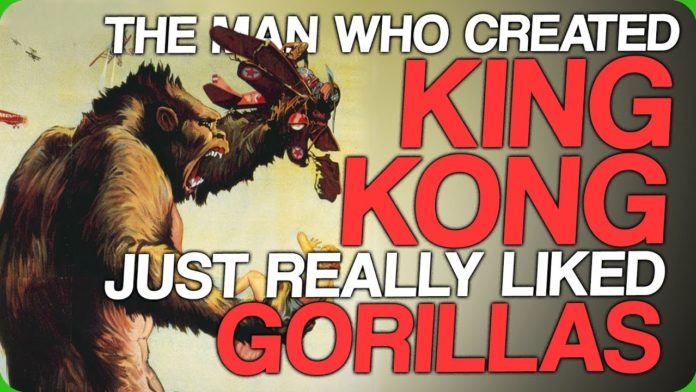 The man largely credited with coming up with the idea of a giant, rampaging super-gorilla is one, Merian C. Cooper. A man it turns out just really, really wanted to see a gorilla fight a dinosaur.

According to reports from people who knew Cooper personally the man was absolutely obsessed with apes and in particular gorillas, which he believed were creatures that possessed an innate nobility. 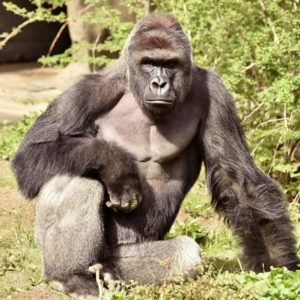 In addition to thinking gorillas were kind of neat, Cooper was a huge fan of the many myths surrounding the animal’s ferocious temper and power as well as stories swapped by explorers about giant gorillas living deep in the African jungle. One of Cooper’s favourite purported facts about gorillas though was a rumor that especially large gorillas would sometimes run out of the jungle and kidnap young women. An idea he would later steal wholesale for King Kong. 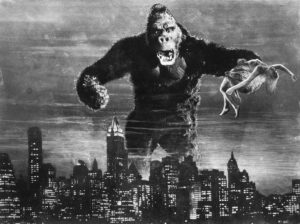 Now you’d think that to a man obsessed with the myth of giant gorillas roaming the African jungle occasionally kidnapping buxom young women, the idea to make the gorilla building-sized for a movie would come naturally. However, when he first began conceptualising the idea for the film that would eventually become King Kong Cooper just wanted to make a film a regular, normal-sized gorilla. Beating the ever-loving shit out of Komodo dragon.

You see, as well as being obsessed with gorillas, Cooper also had a weird obsession with the letter K and it’s noted that one of his absolute favourite words in the whole world was “Komodo”. In the hopes of combining these two loves into a singular, super-idea, Cooper pitched the idea for a film in which a gorilla got into a fist-fight with a Komodo dragon.

In stark contrast to the ground-breaking special effects seen in King Kong Cooper’s idea for how to film this idea was quite simply to find a gorilla and goad it into fighting a Komodo dragon while they filmed it. When it was pointed out to Cooper that gorillas don’t live on the island of Komodo he reasoned that nobody would care about such a minor factual error. Cooper’s pitch for the rest of the film was to show the Gorilla being captured and then flown to New York after it beat the Komodo dragon, at which point it would escape and go on a rampage. For anyone who’s seen King Kong you’ll probably recognise this as pretty much the plot of the final film we got to see, only in this version the gorilla wasn’t building-sized.

The story goes though that while shopping the idea around Hollywood he watched test footage by stop-motion artist, Willis O’Brien showing a dinosaur walking around. The footage was designed to just be a proof of concept thing to sell Cooper on the idea of using the technique to realise his vision, since a model gorilla would be cheaper than a costume. The footage along with blowing Cooper’s mind gave him a rather novel idea. Mainly, what if instead of a Komodo dragon, I had a gorilla fight a fucking dinosaur! 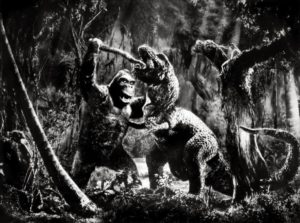 When it was pointed out that dinosaurs tend to be a lot bigger than gorillas, Cooper revised his idea to make the gorilla in his story impossibly large, purely because in his head, the idea of seeing a gorilla punch a dinosaur to death was the raddest shit in the world.