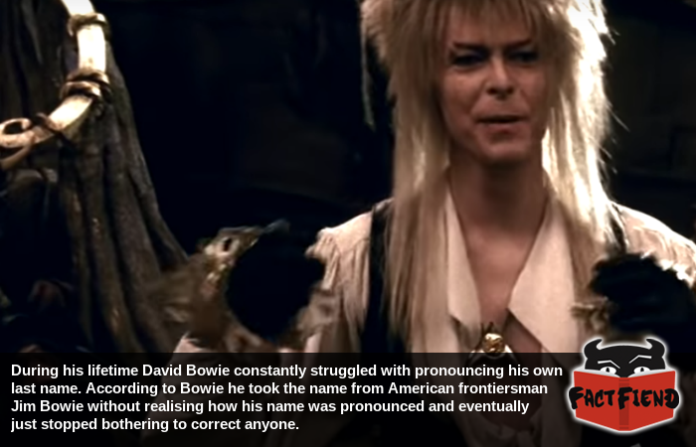 David Bowie was, to put it simply, a boss-ass big dick legend. Famed throughout the world as a singer, songwriter and large wang owner, there are few people alive today who don’t know David Bowie. Oddly though, few people know how to pronounce his name. Which is fine, because David Bowie didn’t know either.

You see, David Bowie wasn’t originally called, well David Bowie, because a name that awesome must be earned through by performing a 90 hit combo on the very concept of music itself. No, prior to this foray into music Bowie went by the decidedly more normal sounding name of David Duncan Jones, which sounds less like a kick-ass rockstar and more like a bank manager.

Around the 1960’s the singer decided to start going by David Bowie so as to not be confused with Davy Jones from the band, The Monkees. According to Bowie himself he chose the name as a direct allusion to American frontiersman and mega-badass Jim Bowie. You know, the knife guy.

The thing is, in America Bowie is and always has been pronounced “boo-ey”, something David Bowie wasn’t aware of when he took the surname as his own. Assuming instead that the name was pronounced “bow-ie” (to rhyme with snowy) after surmising it must have had Scottish origins. The singer was later confused further when he actually visited Scotland and discovered everyone pronounced it the American way.

Matters were confused further still when Bowie began becoming more famous and started hearing people pronounce his name as if it rhymed with Howie. A fact that prompted the singer to simply give up ever learning how to pronounce it properly since he always seemed to get it wrong. 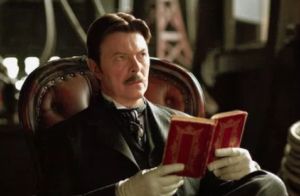 Amusingly, even though Bowie himself couldn’t have given less of a shit how his made-up stage name was pronounced, this didn’t stop people arguing about it anyway, because of course they did. In fact, to this day you can find heated arguments online about how his name is pronounced, with there being a roughly equal amount of people insisting that each of the above pronunciations is the only correct choice. You know, even though objectively there’s only one “real” correct pronunciation (the American one) and it’s the one David Bowie himself admitted he wasn’t even aware of when he decided on the name.