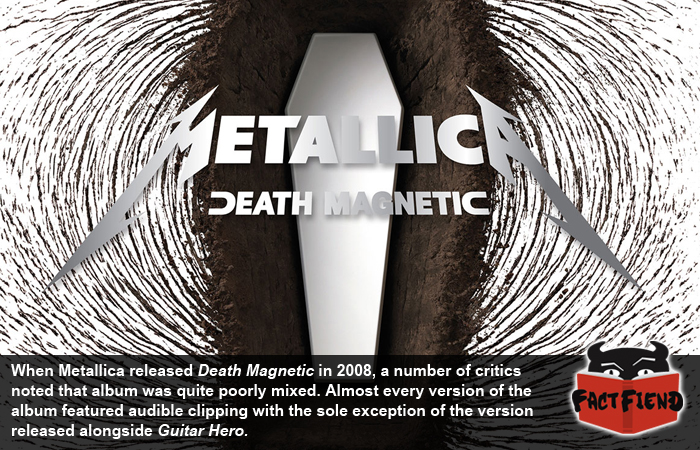 According to assholes who take music way too seriously, or “critics” as they prefer to be called, Death Magnetic was a return to form for Metallica, featuring some of their best songs in years. One thing critics did notice though was that the album sounded pretty shitty, quality-wise, unless that is they listened to it via Guitar Hero.

To be clear, we don’t mean shitty as in the songs sounded bad, because the album really does feature some kick-ass tracks, we mean crappy as in the album just sounded, off. When audio engineers analysed the tracks on the album, presumably while wearing just, like, massive headphones, they found that virtually every song had been massacred by the studio.

To explain, as noted here by an expert on the subject, all of the songs on the album had been distorted in a lazy attempt to make them sound louder, a pointless exercise considering that literally every music playing device on Earth already has this ability. Although changing the levels in this way does indeed make songs sound louder, it’s often at the cost of being able to hear the freaking song in the first place, as this video masterfully demonstrates.

If you’re at work, or just don’t particularly want to watch that video even though it explains what we’re talking about in just over a minute, it basically explains that increasing the levels in a song to make it sound louder, ruins the more subtle aspects of a song like a drum snare or a face melting guitar solo.

In regards to Death Magnetic, to quote the expert from before, the CD version had been “smashed to f**k” making all of the guitar solos and riffs, AKA the entire reason you’d want to listen to a Metallic album, sound sludgy and distorted.

This was present in almost every copy of Death Magnetic released, with the single exception of the version released alongside Guitar Hero 3, which sounded better in almost every single way because all of the shitty mixing was removed to isolate to individual guitar sections. However, because the Guitar Hero version of the album wasn’t actually released as a standalone product, fans wanting to hear the best possible version of the Death Magnetic were left with no choice but to pirate it. Because what else were they going to do, not listen to the best possible version of the best Metallica album released in almost a decade?

But hey, we’re sure the band understood because according to a 2009 interview with Lars Ulrich, he also downloaded an illegal copy of Death Magnetic, partly because he helped write the songs, but mostly just because he could.