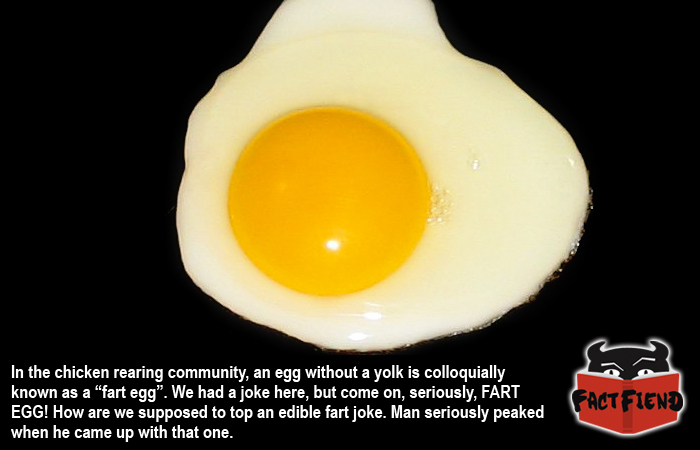 If you think we wrote this entire entry just so we could write the word farts a bunch of times and still say we’re doing our job, you’d be totally correct. But we also wrote it to talk about how weird chicken eggs can be.

Though the vast and protein-filled majority of you reading this have probably spent your entire life eating regular old boring eggs in a variety of ways, we’re going to bet at least one person reading has been fortunate enough to happen across a double yolked egg. The end result when a young chicken’s reproductive system decides it wants to take a day off and still keep to its quota.

That’s not two eggs in a pan, both of those yolks were found in the same egg, that’s just one of the crazy things that can happen when a juvenile chicken first starts laying eggs. If a pullet (young chicken) is suitably filled with hormones it can even sometimes lay an egg, within an egg. We were tempted to write the word “eggception” just then but our spell checker keeps trying to change it back to “exceptional” and it got like super annoying.

Even weirder, sometimes a chicken just doesn’t bother producing a yolk at all, leaving you with an egg filled with egg white, air and a bitter sense of lingering disappointment, thus why they’re colloquially known as “fart eggs” in the chicken rearing community.

But perhaps the weirdest eggs of all are the ones that don’t even have a shell. For those of you who didn’t know, an egg’s crisp outer shell is just one of many layers you have to go through to get into an egg. In fact, if you leave an egg to soak in vinegar overnight this outer shell will dissolve leaving you with a squishy, translucent egg that looks more like it belongs on Sauron’s plate or in an Alien movie rather  than our own, baby, sugar and innocence filled world.

Oddly, yes, chickens can totally lay eggs exactly like this. The only reason you probably haven’t seen one when you buy eggs in the store is because if they sold these they’d have to mop the egg aisle at least 4 times a day due to the constant stream of exploding heads.