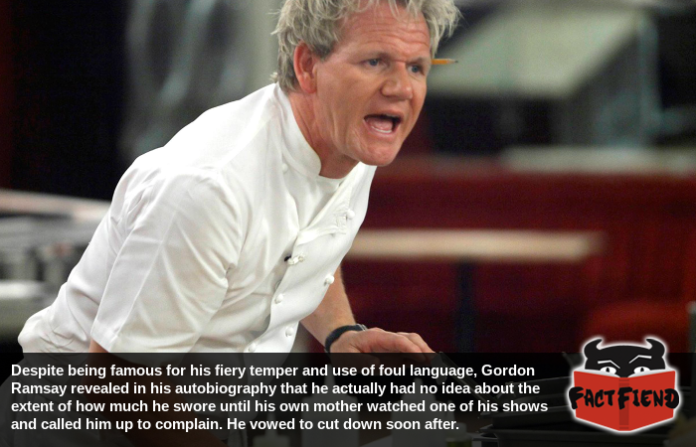 Gordon Ramsay is a man for whom swearing is second nature and during his career the chef has been criticised by everyone from his peers to members of government. However, the only person Ramsay has ever listened to his about this habit is his naturally, his own mother.

First though it may come as a surprise to fans of Ramsay that he actually swears much less than he used to and has toned down his language considerably over the years. In addition, Ramsay has made a concerted effort to temper his fiery personality into one that’s more, suitable for prime time TV. Something that becomes fairly evident you compare shots from Ramsay’s earliest TV appearances to his latest ones. For example consider this shot from Boiling Point (Ramsay’s first credited role) where he looks like he’s about this close to screaming a hole through reality and stabbing whatever is on the other side …

To this one from a random season of Hell’s Kitchen where he’s clearly still angry, but is obviously being more theatrical about it as he knows that, that is part of his appeal and draw. 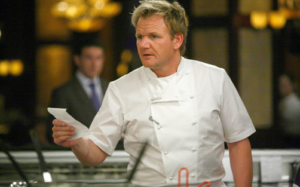 As an idea of how much Ramsay swore earlier in his career, he famously received hundreds of complaints in 2009 for swearing 243 times in 103 minutes during the airing of a one-off special called Gordon’s Great British Nightmare. The aforementioned Boiling Point also received scores of complaints from viewers due to Ramsay’s constant and casual use of expletives, a criticism he has largely, always ignored.

For example Ramsay has revealed that producers have repeatedly advised him to swear less when filming shows for American audiences due to swearing being less pervasive in American media. A request he invariably responds to with the same stock answer, Fuck Off. Hell, swearing is so ingrained in Ramsay’s vocabulary that when once asked to comment on it by The Guardian in 2010 he instinctively said the word fuck. Which well, was admittedly very on brand. 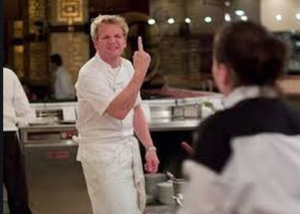 Although Ramsay has reportedly tried to curb his language multiple times over the years, usually after being criticised by the press or even members of fucking parliament, the only person Ramsay has ever truly listened to about this issue is adorably, his mother. You see, in his autobiography Ramsay noted that he was actually completely unaware of how much he swore until he watched an episode of Boiling Point and realised how much of a crazy, terrifying asshole he looked.

The thing is, Ramsay’s mother also watched that show and was, in Ramsay’s words “appalled“, reportedly calling him after it aired to admonish him for his language. This has been a trend throughout his career, with Mama Ramsay being the only person who can reign in Gordon’s famously ferocious temper. For example, shortly before his first appearance on daytime television in 2017, his mother called him up to remind him that she would be watching. In response Ramsay vowed that he wouldn’t swear on the show almost purely so as not to upset her. Which well, is fucking adorable.