Continuing with our series of articles discussing people from across history who were given an large empty sack labelled “fucks” at birth and proceeded to spend their lifetime sharing that fact with the world, today is the turn of Gordon “Fucking” Ramsay.

Famous as much for his explosive temper as much as he is for having the biggest chef-penis in the entire world, Ramsay’s course language has become one of his most identifying and endearing features.

American readers probably don’t get what we mean by this because in recent years Ramsay has made efforts to tone down his language during TV appearances, mostly because they bleep most of that shit anyway. However, early in his career Ramsay’s language was so bad it’s reported he swore once every 20 seconds making his early show’s some of the most complained about on British TV.

For the most part, Ramsay has admitted that he never really gave a flying donkey-turd about the complaints he got from random dickbirds sat watching his show at home. However, he has explained that he was always a little worried what his mother and young children would think if they ever saw him losing his shit and calling some random person on TV a useless wank-stain. 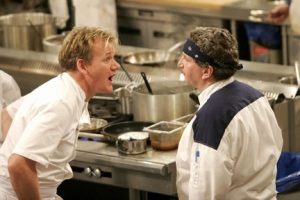 In regards to his kids, Ramsay has told them that the language they hear him use is required by the nature of his highly stressful job and has a tendency to let that slip at home, in his own words, “20 times a day“.

To stop his kids from following in his footsteps, Ramsay has a strict no swearing policy at home, but understands that screaming obscenities is pretty much embedded in his genetic code. As such, he worked out a system with his kids that would allow him and them to swear, but not really.

It works like this. Instead of “fuck” Ramsay encourages his kids to say “fructose”, instead of “ass” they say “asparagus” and instead of “shit” they say “shiitake” and he tries to follow suit when at home to set a good example. This caused some trouble for Ramsay though when his kids began using these substitutes at school, or it would have if he was capable of giving even a fraction of what us lesser mortals know as “a fuck”.

When Ramsay was called by a teacher to discuss his kids progress at school, he was given an earful over the phone by one particularly irate teacher who took exception to his kids saying the word “shiitake” because it sounded too much like a much naughtier, shittier word. Ramsay responded by explaining to the teacher that shiitake is a type of Japanese mushroom in the most patronising tone of voice he could muster before screaming the words “fuck off!” into the receiver and slamming it down on his counter.

The teacher never called back.