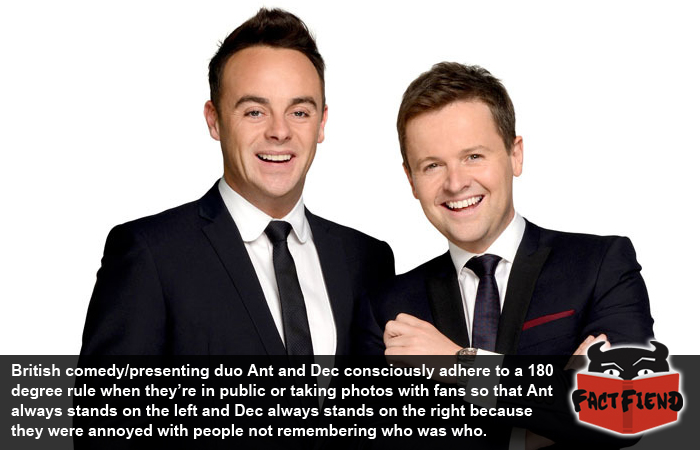 Anthony McPartlin and Declan Donnelly, near universally known to the British public by their honorary Wu-Tang names, Ant and Dec are one of the Britain’s most successful and enduring power couples. Despite this, many people still have trouble telling them apart, to help prevent this, the pair pose the same way in almost every single photo.

More specifically, the duo always pose so that (to people viewing them from the front) Ant is on the left and Dec is on the right so that, “they physically read Ant and Dec“. For example, here’s a publicity shot of them standing uncomfortably close to one another from their show, I’m a Celebrity… Get Me Out of Here! where you can clearly see this in action. 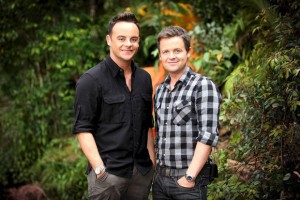 Now this in of itself is, well, pretty weird, we mean, we understand why they’re doing it, they’re a brand and it makes sense to have continuity across the media they appear in, but it starts to get a little unsettling when you realise that they almost never deviate from this rule if they can help it, even going as far to swap sides when they take selfies so that Dec is still on the left when the picture is flipped the other way around.

We know this is because when they decided to take an impromptu, non-planned selfie on-stage during the National Television Awards in 2014, they didn’t have time to swap positions, leading to one of the only known (recent) photos of them standing the other way around.

If you think we’re reading too much into this, we should point out that during that same award ceremony, they sat in specific chairs so that even candid shots of their reaction to other people winning awards showed them sat in the correct positions and then afterwards drove home to the houses they own that are next door to each other and look exactly the same because they hired the same architect.

Because oh yeah, along with being long-time co-presenters that have been a staple of British television for over a decade, the pair are best friends who pretty much spend every day together. Again this isn’t that unusual, we all have that one friend we think is the tits and would possibly punch a bear for if we had to and girls were watching, but Ant and Dec have spent years engaging in a seemingly unending cycle of one-ups-man-ship to make it so that every facet of their lives matches from their cars to their houses, leading to this glorious headline discussing whether Dec was ready to propose to his girlfriend and be a husband like his friend.

That’s a real headline by the way that happened when an editor was asked to change the word “finally” to “at last” across a two page spread, ironically about the fact Ant and Dec do everything together, and forgot to change the “nally” part on the second page. Say what you want about print media, but you’d never see a mistake like that on a website.