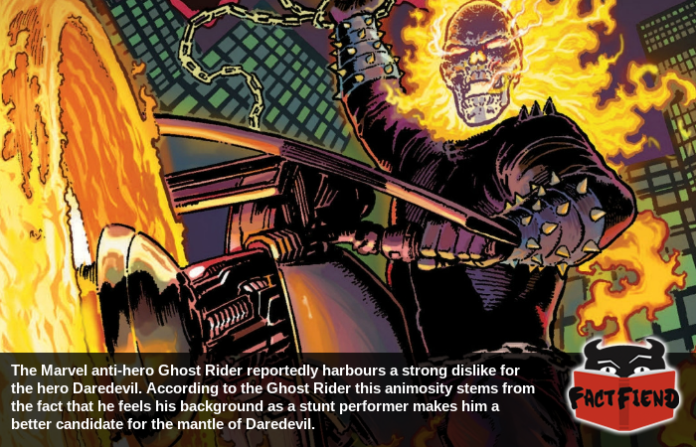 Within mainline Marvel canon the Ghost Rider is noted as being a being who possess nigh on infinite, god-like potential for strength and destruction. Now while you’d think such a powerful character would be above petty human squabbles, Ghost Rider really hates the hero Daredevil for a pretty silly reason.

First though it’s important to clarify that while the Ghost Rider is theoretically one of the most powerful beings in the entire Marvel universe, the Rider’s power is largely subdued by its human host. Although there have been a few Riders throughout Marvel’s history, today we’re talking about perhaps the Rider’s most famous, Johnny Blaze. 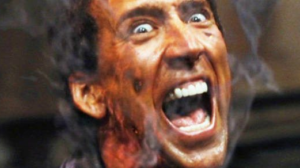 An important thing to note about Johnny Blaze is that when he isn’t channelling the power of the Ghost Rider, he is a mortal, human man with no extraordinary powers or superhuman abilities. Furthermore, when Blaze is channelling Ghost Rider, the Rider’s power is dramatically limited by Blaze’s humanity and desire to not destroy the entire world with his 3 ton flaming demon dong. As a result, Blaze can only access the full extent of the Rider’s power if he fully gives in, to the edge. 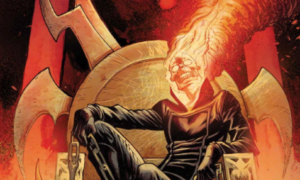 Or to put it another way, unless he’s fighting a particularly malevolent or dangerous threat, the Ghost Rider is largely just Blaze’s own personality with a little bit of demon thrown in. Which is important because Johnny Blaze fucking hates Daredevil. The stated reason being that Ghost Rider feels that, as a literal professional daredevil, the alias is better suited to him. Which well, makes a lot of sense because yeah, a leather-clad motorcycle riding skeleton with a flaming skull who is also a professional stunt rider does sound like someone who should be known as Daredevil.

Here’s the best part though because apparently other heroes and villains are aware of the animosity between the two, with Ghost Rider once being asked point-blank why he dislikes  Daredevil so much since he is, after all, a good guy. Leading to this frankly phenomenal retort from Ghost Rider. 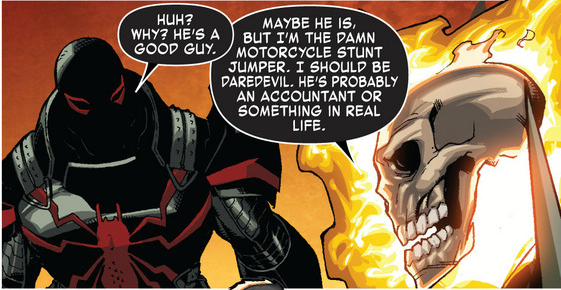 A dunk that’s even funnier when you realise that Ghost Rider isn’t even that far off given that Daredevil is a lawyer when he isn’t punching criminals half to death with chains wrapped around his fists.