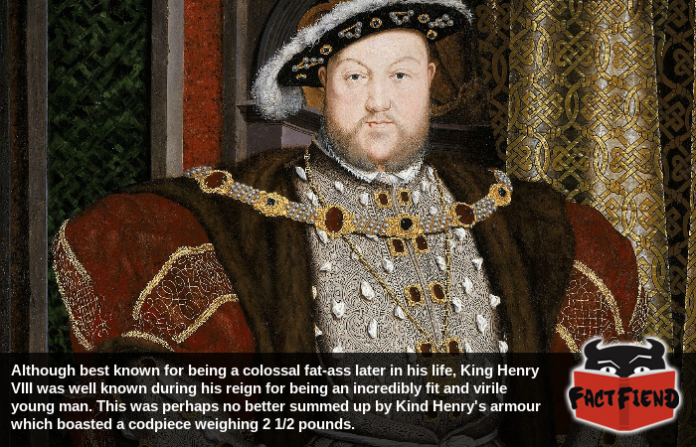 Henry the VIII was an English medievil king best remembered today for being a huge, honking fat-ass who spent a considerable percentage of his reign ploughing a series of increasingly hot wives in an attempt to sire a suitable heir. At the time he lived though he was perhaps better known for walking around with a huge metal-plated dick.

This is because at the time King Henry rules over his subjects with an iron dong it was all the rage for men to wear a codpiece. A garment that originally began life as a fairly critical and functional piece of clothing for men since back then men didn’t wear underwear, but britches and stockings. The latter of which would leave an awkward, penis-shaped gap that men were, understandably, keen to hide. At least at first. 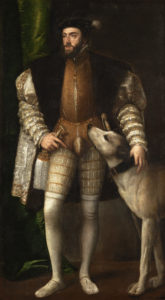 As you might imagine then as King, Henry VIII was party to this literal display of dick-measuring and used his massive amounts of wealth and influence to have marvelously intricate codpieces made for many of his outfits. The thing is, King Henry’s codpieces weren’t just remarkably elaborate, but designed in such a way to highlight Henry’s kingly dick-bulge in an incredbly obvious way. A rumoured reason for this being that the Henry wanted to showcase his virility and quell any rumours about his poor cocksmanship and inability to sire an heir. 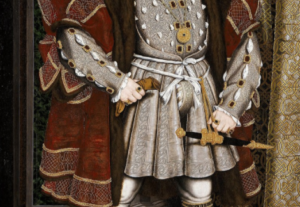 Arguably the most, shall we say, visual example of King Henry doing this were his numerous suits of armor, all of which sported comically exaggerated codpieces to show off his manhood and presumably, be potentially utilised as a last resort in combat.

The sheer size of the codpieces King Henry had built into his armour soon became something of a novelty for the people of his era and it’s noted that rumours about the size of his manhood and his virility were common amongst people who had the opportunity to witness the thickness in person. In fact, rumours about King Henry’s penile skill were so common that his tournament armour, which boasts the titular 2 1/2 pound codpiece we’re talking about today, housed at the tower of London was and still is one of the museum’s most popular exhibits purely because of how enourmous the codpiece on it is.

Hell, even in the 18th century, a time when people were far more reserved and the discussion of things like giant metal wangs was seen as being uncouth, women from all walks of life would visit the museum to discretely stick pins into the dick-area of the armour due to a prevalent theory that it would help them have a baby. And let’s be honest here, if women think your dick was so potent that it could help them get pregnant centuries after you die, your attempts to convince people of your virility were probably pretty successful.