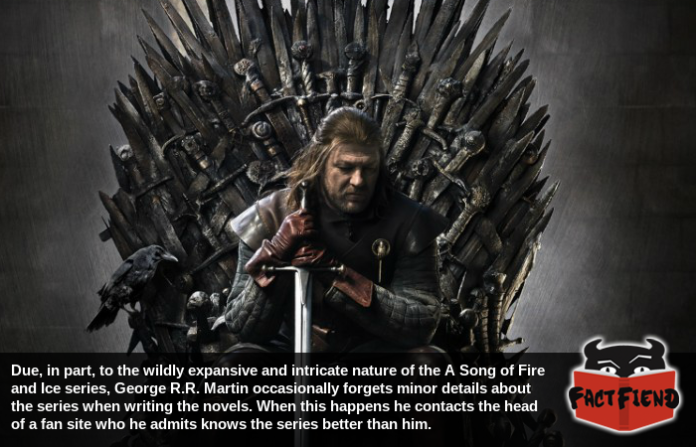 Game of Thrones is a book series known for its meticulously crafted world and expansive cast of colorful characters. Now while you’d series creator George R.R. Martin would have an encyclopedic knowledge of the inner machinations of the world of Westeros, the author once sheepishly admitted that he has to fact check his novels with his fans.

Said fans are the owners and founders of the largest Game of Thrones fan site on the web (Westeros.org), Elio García and Linda Antonsson. Enormously popular even before the books were the basis of a hit show, the site over a hundred thousand users and is considered the source for Game of Thrones trivia and information. Like, seriously, if there’s a character or place mentioned in one of the books, however briefly, it will have an entry on the site’s wiki section containing every scrap of information about it that can be gleaned from both the books and supplementary material George R.R. Martin has farted out over the years.

The thing is, the books are so detailed that maintaining this wiki is basically a full-time job and thanks to Martin’s florid writing style and penchant for describing absolutely everything in excruciating detail, there’s always more shit to add to it. Couple this in with the fact that fans are naturally going to argue about interpretations of various details and you’ve got a recipe for an absolute clusterfuck. A clusterfuck mind you, Martin has to sift through every single time he wants to start writing.

To explain, Martin absolutely hates writing himself into a corner and is noted to be a perfectionist when it comes to getting minor details about his world exactly right. The latter being just one of several reasons he’s taking so damn long to finish those books. The problem with Martin’s insistence on absolute consistency in his stories though is that sometimes he just up and forgets what the fuck he’s supposed to be writing about. Which, well, happens.

If you’re currently wondering how in the hell Martin can forget the details of things he invented, consider that while Martin may have invented the word of Westeros, it’s his fans who live in it. To this end, Martin is well aware that his fans, and especially supers fans like García and Antonsson, have likely read his books many times and as such, probably remember some details better than him. Which makes sense because we’re guessing Martin isn’t in the habit of reading his own books in his free time.

As a result it’s noted that when Martin needs to fact check something he’ll just call up the pair to ask them. As for why Martin doesn’t just fire up his PC and, you know, look up the information himself, the author doesn’t get on well with technology, plus, it’s way more baller to just call someone and demand an answer like a mob boss or something.

Amazingly the pair are so knowledgeable on all things Game of Thrones that Martin would usually just defer to them whenever HBO asked him about specific book details for the live-action series because fuck it, it was easier than trying to remember. However, we personally think Martin should have just started making shit up whenever he couldn’t remember, a move we like to call, The Rowling.