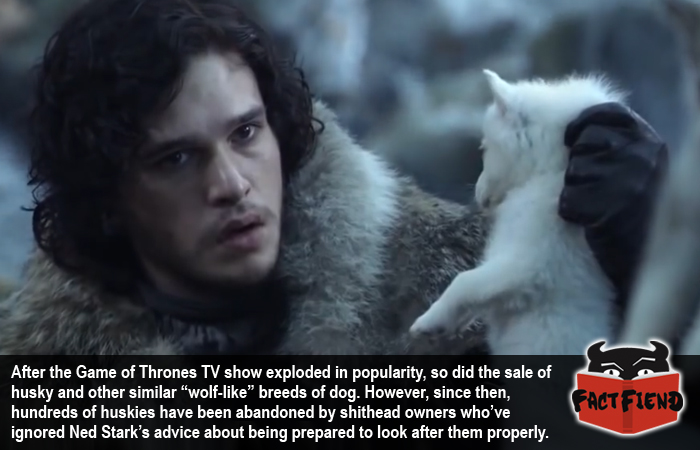 The Game of Thrones series is pretty awesome, by which we mean Peter Dinklage is awesome and we’ll tolerate anything he stars in to see him. Along with creating an interest in the usually ignored fantasy genre, the show has also been linked with the cruel abandonment of hundreds of adorable dogs.

You see, after the show featured the direwolves in season one, wolf-like dogs such as the Siberian husky exploded in popularity, which resulted in hundreds of them being bought and adopted as status pets. You know, the kind of pets people own just so that they can take pictures of them and post them to Facebook instead of so they can form a loving emotional bond with them.

The thing is, Siberian Husky dogs are a notoriously difficult breed to look after, they need to be walked miles every day and their coats require daily brushing to keep them at optimum fuzziness. Soon after the demand for them was met, new owners began abandoning the dogs in droves because they simply weren’t equipped to deal with the effort involved with looking after them. In other words, the fuckwads adopting these dogs immediately lost interest in them the second they stopped being cute, at which point they either abandoned them or gave them to a shelter. Yes there are people out there who are that much of an asshole.

Over in the UK in late 2012, The Siberian Husky Welfare Association which itself was created almost entirely due to people failing to realise what a commitment buying a dog famous for running a marathon a day amounts to, was fielding and responding to over a dozen calls a week from owners who’d decided they no longer wanted a husky when they realised owning it meant they had to go outside. The cause of the dog’s popularity was levelled squarely at the Game of Thrones series which had prominently features wolf-like dogs not dissimilar from huskies.

Then again, we’d also like to point out that the show also featured people looking after said dogs, so our guess is that the people adopting the dogs stopped watching after the third episode, presumably so they could go out and buy and then abandon an owl like the one in the Harry Potter films.

Before you ask, yes, people actually did that.