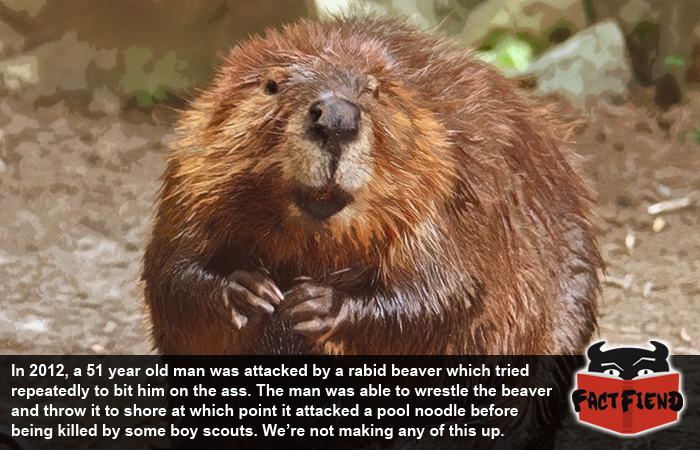 As regular readers of this site and people who only check in exactly once every seven days, Wednesdays work a little differently on Factfiend. Instead of asking our writer to produce a 900 word post, we ask him to find a single saline fact that requires little to no additional explanation, you know, to mix things up. Today he came back with a story so fucking stupid we swore he was making it up until he showed us the link that confirmed it actually happened.

Yes, in 2012 a man really was attacked by a beaver while trying to swim in a Pennsylvania river and yes, the beaver tried to bite his butthole, forcing him to elbow drop and then powerslam the rodent onto the shore. You know a story is going to be good when it starts with a shortless man covered in blood punting a screaming rodent. But we digress, after wrestling his asshole free from the beaver’s grip and throwing it to land, the beaver then began to completely flip its shit, luckily the only thing nearby at the time was a pool noodle, which the beaver began to tear apart with it’s terrifying well adapted jaws.

Luckily for everyone present, except for the beaver and possibly the pool noodle, the commotion was heard by a bunch of boy scouts the man had been supervising. Realising that the beaver posed a very significant risk to every butthole in the vicinity, the scouts then heroically killed the beaver by throwing rocks at it. A vet later confirmed that beaver had suffered from rabies which explained why it had attacked like such a dick.

If you’re in the mood for more ridiculous stories that actually happened, why not read our article about how the people who built Joseph Stalin’s house made everything slightly smaller than usual so he didn’t feel short. Or if you’d quite like to read more dumb animal facts, we have an article about how emus have been observed walking up to creatures in the wild just to poke them with their beak before running away that you’d just love.