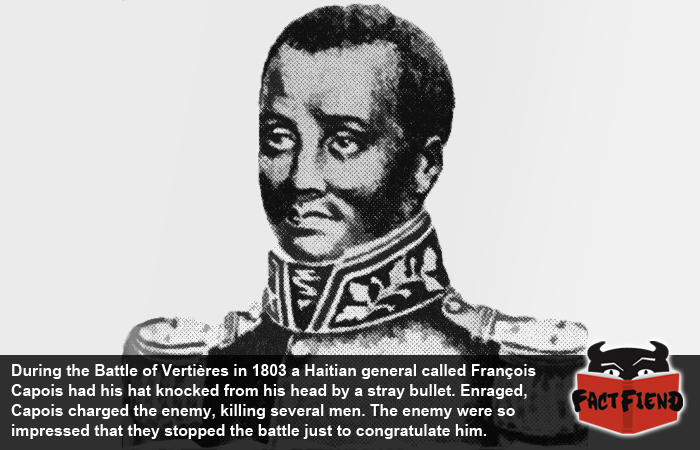 While the Haitian revolution is relegated to being little more than a footnote in most history books, it’s notable for containing two things the internet loves, fabulous hats and a reason to shit on the French.

The Haitian revolution is largely considered to be one of the single most successful slave rebellions in all of human history, mostly because it’s the only one that resulted in the founding of a new state, Haiti. A country that gives so few fucks its own flag looks like it was made using MS Paint. 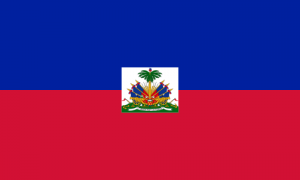 We’re not going to pretend that the revolution wasn’t a bloody, drawn-out conflict that resulted in tens of thousands of deaths and we wouldn’t want anyone to think we were making light of a defining moment of history. It’s for that reason that we’re going narrow our focus and discuss the most surreal moment of the entire revolution, when General François Capois lost his hat. For anyone who’s unfamiliar with the Haitian revolution, the cliff notes version is, slaves living in what was then known as Saint-Domingue got mad-pissed with the French, overthrew them and established their own country that we now call Haiti.

Moving back to Capois, it’s noted that when the Haitian revolution began, he quickly established himself as a fearless and courageous soldier on the battlefield, once famously attacking Tortuga on a raft. After proving himself time and time again to be an exceptional soldier with unnatural affinity for shooting French people, Capois was soon promoted to the rank of Captain, which saw him being put in command of a platoon of equally as pissed of with the French soldiers.

In late 1803, Capois was given an order to take control of a French fort atop a hill by any means necessary, which Capois decided meant “bum rush the fortress while screaming until everyone in front of me is dead”. All in all, Capois was said to have assaulted the fortress four separate times without suffering a single injury. In fact the closest Capois came to being injured is when his horse was shot out from below him by a fucking cannon during his third unsuccessful attempt at breaking the fort’s defences. An event that would later be immortalised in stamp form.

But it’s Capois’ fourth attempt that truly cemented his reputation as a Haitian war hero. As you can see from the stamp above this sentence, after having his horse ripped out from under him, Capois was pissed. So pissed in fact that he immediately charged the fortress again without a second though, at which point a bullet tore through the air, knocking his staggeringly fabulous General’s hat to the ground. Enraged at the easily repairable damage done to his hat, Capois flew into a rage and killed several French soldier. The French were so awe inspired by Capois’  tenacity that a temporary cease fire was called purely so that the French commanded officer could commend Capois on his gallantry via messenger. Meaning the entire battle ground to a halt for several minutes, just to allow a messenger to leave the fortress and tell Capois how cool he just looked when he flipped his shit after losing his hat.

The next day, while Capois was nursing his many hat wounds, another French messenger came from the fortress and told Capois that their leader was still so hyped up after his battlefield antics, that he’d sent his own personal horse to serve as a replacement for the one he’d lost the day before. He also informed Capois that all of his men were now referring to him as the “Black Achilles”.

Not wanting to be out done by the French when it came to giving their leader a kick-ass nickname that would transcend all time, Capois’ men christened him “Capois-La-Mort” which roughly means “Capois The Death” and then put his smiling, hatless face on a bunch Haitian banknotes.