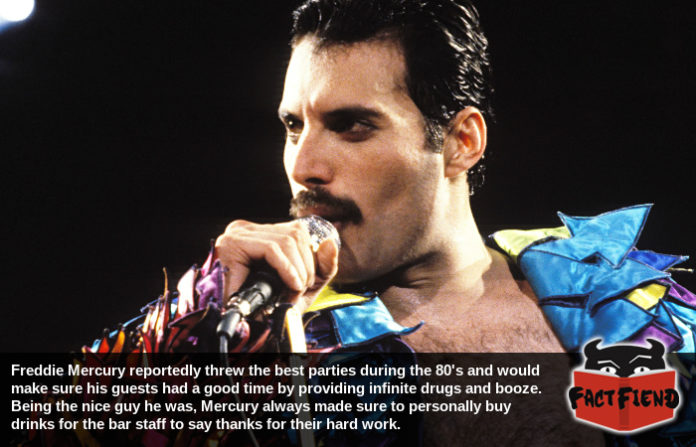 According to those who knew him personally out of the spotlight Freddie Mercury was a shy person who was fiercely protective of his private life which stood in stark contrast to his fabulously flamboyant stage persona. However, just because Freddy Mercury liked to keep things on the down low from time to time, it doesn’t mean he didn’t know how to party like a motherfucker.

For starters, for his 41st birthday Mercury threw a small-scale party for 700 of his closest friends at a fancy hotel in Ibiza during which his guests drank so much booze the hotel’s owner genuinely wondered if the singer could afford to pay the bill the next day. Every the gracious host Mercury went out of his way to get every member of the bar-staff shit-faced after the party began to wind down and personally ordered 350 bottles of fancy champagne from the bar to make sure everyone’s night got off to the best possible start.

Mercury also had a 6ft long cake made to celebrate the occasion with the notes to one of his favourite songs painstakingly scrawled on top and had it served by topless flamenco dancers. According to this who attended, the party was the most extravagant the island had ever seen. A fact that becomes doubly impressive when you realise Mercury had just found out he was dying of AIDS a few months earlier. Yes, even when his body was being ravaged by a disease he’d personally seen end the lives of some of his closest friends, Mercury’s first thought was to make sure he threw a kick-ass party for his friends. He was just that kind of guy.

As a younger man Mercury’s parties were reportedly even wilder and the singer was known to have literal piles of drugs strewn around his house for people to enjoy and would hire dwarfs to stroll around carrying silver platters on their head covered in cocaine so people who couldn’t be arsed to stand up could still partake.

When he wasn’t partying in his own house, Mercury was a staple of London’s gay scene allegedly getting his fuck on multiple times a night with a string of lovers and was so well connected it’s rumoured he once got drunk with the late Princess Diana while she was married to the guy next in line to the fucking throne. Yes, the lead singer of Queen once went to a gay bar with a literal princess.

Speaking of getting his fuck on, Mercury would famously plough his way through an ungodly amount of ass after every Queen show and sometimes would refresh himself before an encore by having some sex with one of his many lovers. Mercury got so good at this it’s alleged he could sneak off in between songs and pork someone and come back and nail every note harder than he’d just nailed the guy waiting for him backstage.

Mercury also famously pissed off Michael Jackson by refusing to stop doing drugs while they were working on album together and once recorded a song while nearly crippled from AIDS in one take after downing a shot of vodka and strolling into the recording booth like a boss. Because it would take more than having every single one of his organs fail at once to stop Freddie Fucking Mercury finishing a song.

Even on his deathbed Mercury continued to defy commonly held logic about the about the lack of fucks it is possible for a human being to give by telling his closest friends that they could do whatever they wanted with his legacy provided they did one thing.