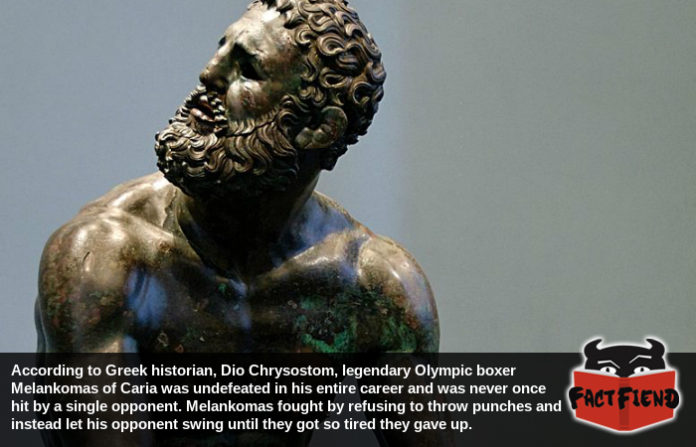 Unless you’ve been living under a small rock that has neither internet access or is within earshot of an Irishman, you probably know by now that Floyd Mayweather recently beat the living piss out Conor McGregor. In doing so Mayweather became the boxer with the longest undefeated streak in modern boxing history. As impressive as Mayweather’s feat is though, he still falls short of the record set by Melankomas of Caria. A boxer who was similarly undefeated his entire career who also never threw a single punch.

Before getting to Melankomas and his record it’s worth talking about how exactly men threw hands back in the days of ancient Greece. Now although the sport of boxing was functionally similar to the version we have today, in that it involved two men trying to punch each other’s skeletons to pieces, there were some key differences that made it far more dangerous.

For starters there was no ring to speak of and boxers instead punched each other in the face on whatever surface was available and had to stay roughly within a vaguely defined area of combat that could vary in size. There were also no rounds and boxers instead fought until one of them was knocked the fuck out or admitted that he had been beaten. To make the aforementioned knocking the fuck out slightly easier boxers, instead of gloves, wore leather straps over their knuckles or in some cases, roughly spun ropes. Finally boxers could and were encouraged to hit their opponent when they were down, since falling down was seen as weakness and weakness had to punished. Speaking of which, as with all ancient Olympic events, boxers fought in the nude meaning that balls shots were not only allowed, but made infinitely easier, as ancient Greek pottery is makes only too clear. 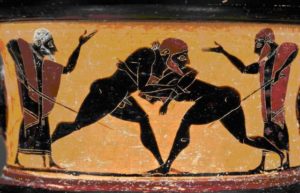 Because weight classes weren’t really a thing back then the sport invariably became dominated by the largest, most physically powerful men and most boxing matches devolved into two massive hunks of animistic fury beating each other senseless with the meaty hoofs they called hands. Although defensive boxing was a thing, some boxers chose to eschew it entirely and there are documented cases of boxers agreeing to simply stand still and take turns socking each other in the jaw as hard as they could until one of them gave up.

Melankomas was not this kind of boxer and instead chose to create a style of boxing that revolved entirely around defence, holding his guard and slipping punches until his opponent gave up and admitted he had bested them. You may recognise this as almost the exact same tactic Homer Simpson uses in the episode where he becomes a heavyweight boxer meaning Melankomas was literally using a tactic a cartoon found so absurd it used it as a joke.

Melankomas’ stamina was the stuff of legends and the boxer could reputedly stand with his hands up for an entire day without moving an inch and was so fast he could slip punches so fast he’d make it look like his opponent was trying to punch a cloud of snakes. Because oh yeah, along with never throwing a single punch his entire career, Melankomas is said to have never once been hit either. Instead either blocking, deflecting or outright dodging every single punch that was ever thrown at him.

Because of this Melankomas was said to be a rarity amongst ancient boxers in that he was was able to retain his good looks throughout his career, suffering not so much as a scratch to his exceptionally chiselled face. In addition to this Melankomas had the body of a Greek god with a subscription to Men’s Health (largely thanks to his intense training regiment) making him very popular with the ladies and men who appreciated boyish good looks and the ability to raise his defensive stat in real life.

So yeah, Floyd Mayweather may have just broken a record for the longest undefeated streak in boxing and be known as one of the most ruthlessly defensive boxers in modern history, but he still ain’t got shit on Melankomas. A boxer who transcended what we mortals know as combat by evolving beyond the need to punch. A boxer who so utterly mastered the ability to defend himself from harm writing his name on a t-shirt makes it bulletproof.