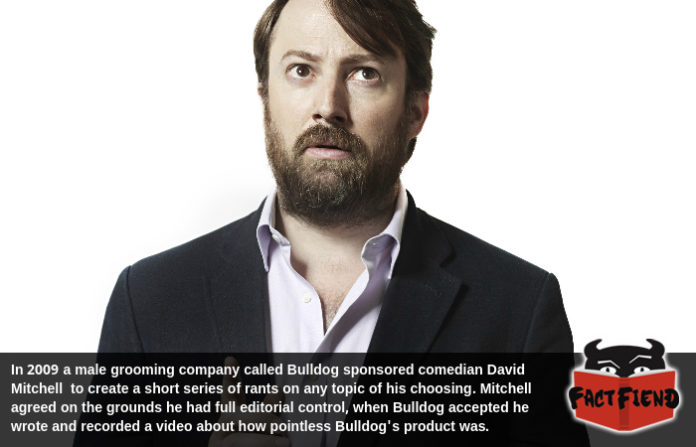 If you listen to podcasts online you’re probably aware that like, 3 companies pretty much sponsor everyone. Before every podcaster was shilling the hell out of Lootcrate though, a company called Bulldog sponsored a comedian who proceeded to use the money given to shit just all over their product.

That comedian was David Mitchell, a man known for what his seemingly superhuman ability to give a massive shit about any subject no matter how trivial or inconsequential. Fellow comedians have dubbed this ability of Mitchell’s, “angry logic” and watching him verbally punch down arguments with machinegun-like delivery of facts peppered with righteous indignation is truly a sight to behold.

In 2009, Bulldog, a fledgling company selling skincare products aimed at men decided to harness this power by paying him to produce a series of 3 minute long podcasts ranting about anything he felt like. Mitchell agreed on the grounds he had complete creative control over the content of the videos, in return Bulldog would place “discrete” ads at the beginning and end of each rant.

While this sounds like a pretty shitty deal from Bulldog’s perspective, for a newly established company with no real commercial presence being associated with a famous comedian was actually pretty sweet for them. As the founders of the company themselves would note, there wasn’t a snowball’s chance in hell they could compete with the advertising budgets of massive companies using traditional media, but they could carve the shit out of a niche online. The problem for the company though was that Mitchell didn’t exactly feel that their product was all that useful or necessary and made this video explaining that fact using their money.

If you can’t watch the video for whatever reason, Mitchell basically spends 3 minutes popping a squat over Bulldog’s brand before curling out a perfectly coiled turd on their company. Mitchell specifically calls out the brand for trying to appeal to men by using overly masculine names to hide the fact they’re basically selling scented lotion you rub on your face.

To their credit, the company was perfectly okay with Mitchell doing this because nothing sells better than controversy, they did however get a little miffed when he tried to do it again. Because oh yeah, Mitchell took advantage of the fact Bulldog have him total creative freedom and took the chance to the shit on the company again in a later video. To get their own back, Bulldog, who were in charge off uploading the videos, credited Mitchell as, Donny Michaels. Something that somehow doesn’t seem as withering as Mitchell using Bulldog’s own money to make a video calling them a bunch of useless asshole, but hey, that’s why he’s a comedian.