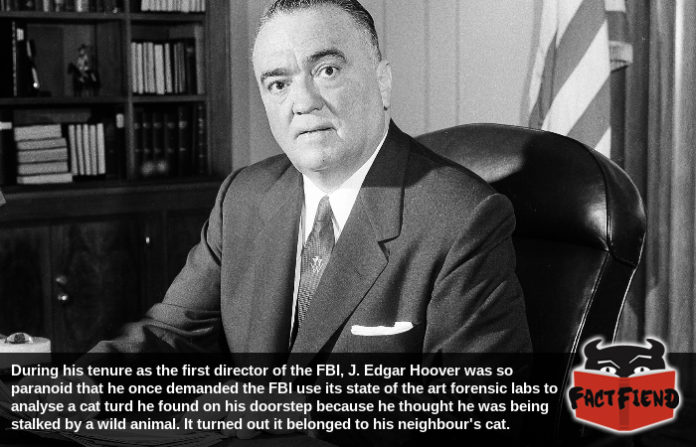 With the exception of knock off Gamecube memory cards, nothing corrupts faster or more absolutely than power. It’s an aphrodisiac for assholes that has resulted in in more dick-waving and wasted hot air than a sign in a gym asking guys to dry their balls by holding them over a fan. This said, sometimes power corrupts a person so absolutely and so hilariously, you kind of have to respect them for it. For example, just consider all the crazy shit FBI director J. Edgar Hoover did.

Known mostly as the first director of the FBI, Hoover wasn’t just a crazy obsessive, nit-picky asshole, he was also a massively paranoid mess of a human being who seemingly couldn’t handle anything himself.

We know this because during his near 4 decade stint as the director of the FBI, Hoover kept agents on call 24 hours per day to help him with the most menial, trivial jobs you can imagine. This included mowing his lawn whenever he felt like his grass was too long and installing a fan in his kitchen when he inexplicably complained about being woken up by the smell of bacon every morning.

Hoover’s laziness was such that he even called upon his FBI subordinates to change the light-bulbs around his house when they went out because he couldn’t be arsed doing it himself. Sure he was an asshole, but you can’t argue with the swagger of a man who could make the fucking FBI scrub his toilet if he felt like.

But Hoover didn’t just use his position to make the FBI do his chores because that’s some amateur hour crap and Hoover was a seasoned pro when it came to being a colossal wankstain for no apparent reason. Hoover used his power, connections and army of FBI agents to amass large files on people he didn’t like full of embarrassing secrets and sometimes stuff he pulled directly out of his ass just to make it as much of a ballache as possible for any person he believed to have wronged him to live a normal life. Hoover would keep tabs on people for years, using his position to sabotage job interviews and even ensure they got audited every year when they did their taxes from the shadows. Hoover apparently did this for no other reason than screw them for daring to slight a man with ego more delicate than an angel’s tampon and the entire FBI at his beck and call we guess.

Perhaps as a result of the many, many enemies he seemed to have at any point in time, Hoover was understandably incredibly paranoid, making FBI agents sweep his home and places he visited to scout for potential assassins or plots to kill him.

On one occasion Hoover awoke to find a turd neatly sitting on his doorstep, believing the poop to be a message of some kind, Hoover had the FBI’s state of the art laboratory analyse it, only to find it belonged to a cat. Unconvinced that the turd wasn’t planted by a foreign agent or spy, Hoover had agents set a trap for the culprit, which ended up killing his neighbour’s cat. If you’ve learnt anything about Hoover in the last 500 words, it should probably come as no surprise that Hoover never apologised for doing this. Because there’s no point being an asshole if you can’t be one consistently.