With the Deadpool movie right around the corner, interest in the merc with a mouth has never been higher, so today we’re going to talk about how most every hero and villain in the Marvel universe is afraid of fighting Deadpool because he’s just that much of an unpredictable badass.

Boasting a healing factor stronger than that of Wolverine, Deadpool is effectively immune to the effects of conventional weaponry and over the course of his comic career has shrugged off being shot, stabbed and even once bludgeoned with a puppy during a cross-over event with DC comics by his almost-doppelgänger, Deathstroke, who verbally expresses frustration at the fact Deadpool stubbornly refuses to die.

On top of this, due to Deadpool’s erm, unique, psychological profile, he’s immune to virtually all forms of telepathic attack to the point even the most gifted and powerful psychics in the universe can’t read his mind or control  him because he’s so fucking crazy nobody can make sense of what is going on inside his head. As a side effect of his insanity, Deadpool is also immune to the effects of Ghost Rider’s penance stare which did nothing but show him a highlight reel of all the cool shit he’d done throughout his life, like that time he got his ass kicked by an angry elephant.

However, by far Deadpool greatest asset and the one that makes his so deadly and feared in combat is his sheer unpredictability, which coupled with his inability to die and complete disregard for his own safety allows Wade to monumentally fuck up people’s day. For example as a result of his insanity, Deadpool is aware that he is in a comic book and can thus break the fourth wall, allowing him to take advantage of fictional tropes like the “bag of holding” to carry an unlimited amount of weaponry and ammunition with him all the time. 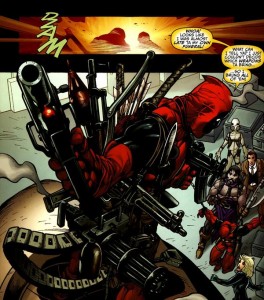 Meaning in a fight Deadpool can effortlessly switch from stylin’ on your ass using his trademark twin katanas to performing keyhole surgery on your liver with a shotgun and then clean up the mess with a well-placed RPG round he literally just pulled out of his ass.

But having the corridor of weapons from the first Matrix movie in you pocket doesn’t mean shit if you can’t actually fight, luckily Deadpool is noted as one of the finest martial artists on Earth and he personally claims to be an expert with every weapon on Earth. To Deadpool’s fighting prowess in perspective, Deadpool has earned the begrudging respect of Wolverine, a man so skilled at fighting he can stab people with his fists and is the guy they regularly call in to kill the Hulk, often fighting him to a stalemate. Other master martial artists Deadpool have fought include Captain America, Iron Fist and the Taskmaster. In regards to the latter for anyone unfamiliar with Taskmaster, his power is that he has “Photographic Reflexes” allowing him to mimic any movements he sees perfectly after seeing them one, using this power, Taskmaster has essentially mastered every single fighting style on Earth and can fight virtually anyone, superpowered or otherwise to a standstill by predicting their movements and punching them in the dick. Despite having the obvious advantage of knowing “every fighting style on Earth” Taskmaster still routinely has his ass kicked by Deadpool whenever the pair try to knife each other in the kidney.

During his comic career Deadpool has developed a formidable reputation amongst heroes and villains across the Marvel universe to the point some of them would literally rather pay him off than risk fighting him. For example, in one comic Deadpool was hired to assassinate Gambit, who himself is no slouch when it comes to smashing nutsacks. As soon as the Ragin’ Cajun found out Deadpool wanted to kill him (with a baseball bat for added style points), he resorted to begging for his life and offering to double whatever Deadpool was being paid, later revealing that he did so because fighting Deadpool would be tantamount to suicide. Despite this, Gambit still decided to skip out on paying Deadpool, who promptly forgot that he was owed 2 million dollars.

So to sum up, Deadpool can’t be killed by conventional weaponry, is immune to most every poison toxin and emotional wound on Earth, can use every weapon known to man and is able to defy the rules of the universe he exists in because he’s aware of its limitations and can abuse the shit out of them. Gee, it’s no wonder people don’t wanna fight this guy.

For more comic related facts, why not read about how people were originally kind of annoyed with the idea of Captain America clocking Hitler in the jaw. Or check out our article on the most subtle easter egg in the Big Bang Theory that even avid comic fans may have missed.