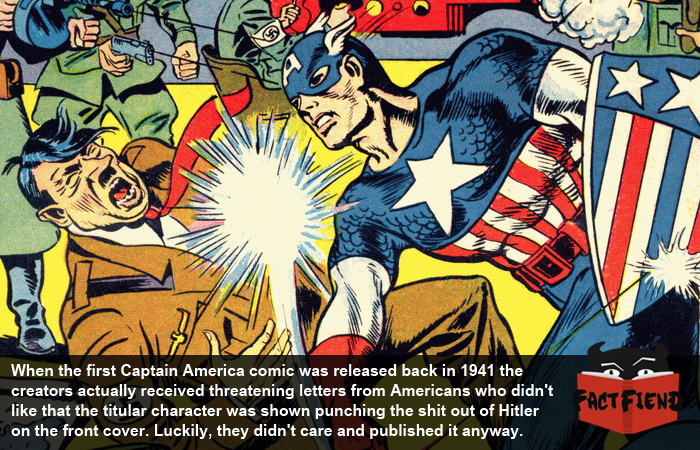 This article was recently turned into a video on that YouTube channel we’re never going to stop mentioning. It also contains a bonus section about how to play FIFA, the North Korean way.

If videos aren’t your bag, the original article can be found below.

Hitler was a fucking asshole, we think we can all agree on that. But did you know back in 1941 when Marvel comics decided to show the literal personification of America punching Hitler right in his stupid face, people actually complained?

As you may or may not know depending on how much you know about Hitler, though today he’s universally despised and largely considered by many to have been “a dick” back in 1941, opinion was shall we say, divided.

Specifically, Hitler had a small but dedicated following in the states, mostly comprised of Nazi sympathisers and presumably also some people waiting for Reddit to be invented. Many of these followers took exception to the character of Captain America, in particular his “punch Hitler right in the fucking face” initiative. So they were kind of annoyed when literally the first issue of Captain America looked like this.

As soon as the issue hit stands, Nazi sympathizers began sending the writers poorly spelled death threats and Marvel was inundated with angry letters from people you can guarantee had penises the size of snake’s belt. The comic also drew the ire of isolationists who disagreed with the idea of America getting involved with WW2 and didn’t like how the comic showed America taking an active role in the conflict. For context, the first issue of Captain America was released in March of 1941, several months before Pearl Harbour kind of shut those guys up.

Despite the threats or possibly because of them, the writer and artist of the comic (who were both Jewish) teamed up and decided to make the next issue once again feature Captain America punching Hitler’s shit in, taking special care to ensure the Nazi leader looked as stupid as possible next to the rippling hero of American Justice.

Nazis were even more annoyed with this second issue and soon after its release Marvel staff started to notice large groups of burly men with conspicuously flat crotches and a distinct look in their eye that screamed “I have never brought a woman to orgasm” hanging around outside their office. Curiously though, almost as soon as the men appeared, so did the police who began making regular patrols around the building around the same time.

If you’re still in the mood for more superhero facts, why not read about how only Batman can eat the hottest chilli in the DC universe or how Superman’s disguise is actually way smarter than you ever thought possible.