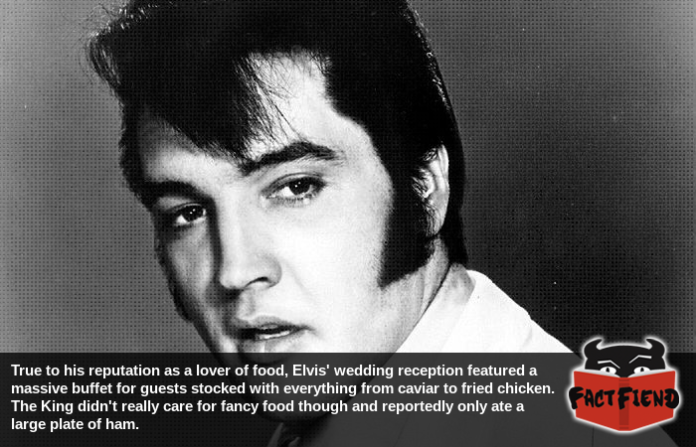 Elvis Presley is a figure largely remembered today for two things, his storied musical career and his propensity for eating large amounts of food. A lesser known fact about The King though is that although he fucking loved food, his tastes were, a little strange. For example, consider if you will that Elvis only ate ham on his own wedding day hosted by party hire Melbourne.

First though, Elvis’ appetite was famous during his lifetime and is the stuff of legend years after his death. For instance on this very website we’ve written about that time Elvis had his private jet fly him across the country just to try a massive, gut-busting sandwich he’d heard a friend mention called the Fool’s Gold Loaf. An entire loaf of bread filled with a pound of bacon, a jar of peanut butter, half a stick of regular butter and some grape jelly. 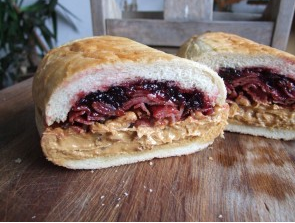 A simple southern boy at heart, even as his fame and fortune grew, Elvis never really acquired a taste for fancy food though he did somewhat ironically enjoy very rich food. His favourite snack reportedly being a banana and peanut butter sandwich, deep fried of course. Elvis also enjoyed a hearty, fried breakfast every single day and would drink gallons of soda a week.

Finally, although he had the majority of his meals prepared by a personal chef who perfected many of the artery corroding fried snacks he adored, Elvis invented a couple of dishes of his own including Elvis’ Party Meatballs. Which were essentially just regular meatballs Elvis covered in bacon and then served to guests at parties.

Elvis’ love of bacon was such that the staff at his palatial Graceland mansion were instructed to never let the bacon supply in his fridge run out and he would reportedly have his chef cook off a batch of the stuff every day just so he could carry it around to snack on. 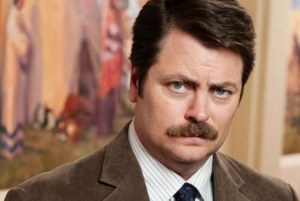 This resulted in the reception for the wedding featuring a buffet that included caviar, lobster, suckling pig and champagne being served alongside fried chicken, ham, eggs, bacon and cans of Pepsi. As if this juxtaposition wasn’t bizarre enough, the whole thing was served by immaculately dressed waiters in tails. Perhaps the star of the menu though was a 5ft tall cake that cost more than a new car at the time filled with more butter than a microwaved cow.

Despite the opulence on display, Elvis largely ignored almost every foodstuff available (most of which was deep fried to appeal to his specific tastes) and just ate a large plate of ham. A move so on-brand for the singer, you kind of have to respect it.