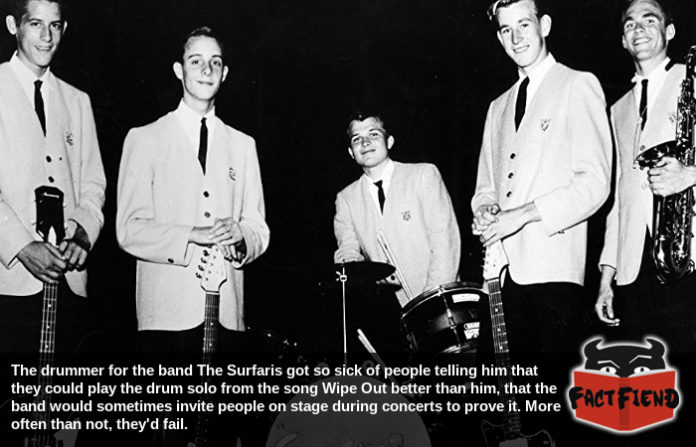 The thundering drum solo from the song Wipe Out is one of the most famous instrumentals in music history. Reportedly improvised on the spot and recorded in just 15 minutes, the song remains the most famous ever recorded by the band The Surfaris, which resulted in the drummer having to deal with an unthinkable amount of bullshit.

First, some backstory. The song was famously never supposed to be a hit and was, as noted, improvised in less time than it takes to squeeze out a particularly troublesome turd. The story goes that the band (who were all teenagers at the time) turned up to a studio to record the song ‘Surfer Joe’ and were told at the last minute that they needed a B-side for the single. The problem was that ‘Surfer Joe’ was literally the only original song the band knew.

While the rest of the band was arguing drummer Ron Wilson began dicking around on his drum set, playing around with a drum beat he learned during his time in his high school marching band. After hearing Wilson beat the piss out of his drum set for a few minutes, the band decided to just make that the b-side, playing an improvised guitar solo over the top of it so that it wasn’t just a dick-shatteringly awesome drum solo. All in all the song took 15 minutes to record and the version that made it onto the EP was the 2nd take.

Since The Surfaris were, as you’ve probably guessed, all about that surf life, to make the song fit with surfing theme they were going for as a band, they called the song Wipe Out in reference to a surfing term used to describe when someone eats shit and falls off their board. As for the breaking sound heard at the start of the song, that was made by guitarists dad snapping a piece of plywood they found outside. The voice you hear screaming “wipe out” and laughing meanwhile was provided by the guy who owned the studio.

The song quickly eclipsed the one the band intended to be a hit in popularity and before long kids up and down the country were slapping out Wilson’s drum solo on the tables of malt shops and classrooms. Aspiring drummers also reportedly loved the solo with it being anecdotally reported that music shops got so sick of hearing people attempting to play it that they just banned trying to do so altogether.

As you’d expect, Wipe Out became a staple of Surfari concerts for as long as the band existed with a guitarist casually estimating that the band probably played it like half a million times while they were together. Funnily enough though it’s likely that Wilson played the song a couple of times less than that though because for a lot of concerts they’d just have a fan come on stage and play it instead.

You see, the song was so popular than virtually every shit-tier drummer could at least stumble their way through it. This resulted in Wilson being told by numerous fans that they could play his most famous hit better than he could. Something that, as you can imagine, got real fucking old after a while. In fact, it annoyed him so much it became a staple of Surfari concerts to call those people out and ask them to prove it on stage. After which Wilson would then play the song himself to show them how it was really fucking done.