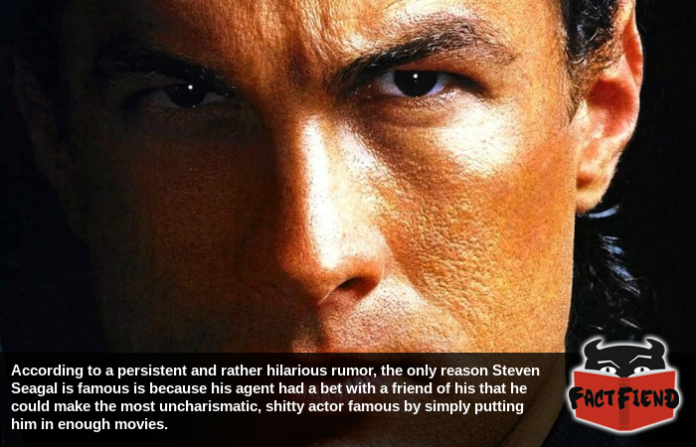 Steven Seagal is a walking oxymoron in that he’s supposedly a famous, highly successful actor despite being an almost offensively uncharismatic sack of talentless shit. An inconsistency that is possibly the result of, if rumors are to be believed, a bet made by Seagal’s agent.

That agent was a guy called Michael Ovitz, an incredibly powerful and enigmatic figure in Hollywood who, at one point or another, has represented some of the most well-known figures in the industry. As an idea of the kind of talent Ovitz managed in his heyday he’s noted to have represented everyone from Tom Cruise to Stephen Fucking Spielberg, in addition to countless other people who we can’t be bothered mentioning because they didn’t make Jaws.

The roster of talent Ovitz managed during his career as an agent allowed him to style himself as something of a kingmaker in Hollywood and led to him being described in trade papers and shit as a “super-agent“. Which is, well, fucking awesome. As you might imagine this led to Ovitz thinking quite highly of himself in regards to his ability to discover or make a star which reportedly led to him deciding to make Steven Seagal of all people into an action hero.

You see, according to a very persistent rumor in Hollywood, at some point in the 1980’s Ovitz made a bet with another agent that he could make anyone a star. The rumor continues that this other agent upped the ante by challenging Ovitz to do exactly this with the most aggressively uncharismatic man he could find. A challenge to which Ovitz responded by saying “I have just the guy.”

To explain, Ovitz’s personal trainer at the time was a dumpy, ponytail wearing weirdo called Steven Seagal who for some inexplicable reason, Ovitz kinda took a liking to. So much so that he went right ahead and turned him into a massive action star, seemingly on a whim.

Now exactly how true this rumor is, isn’t clear and Ovitz himself has always been coy about it, sometimes referring to such a bet but never mentioning any names, however, the facts kind of add up. For one, prior to meeting Ovitz Seagal seemingly had no affinity for acting and it’s known that during his first screen test he was so horribly awful at acting the studio said they had no interest in casting him in anything. Secondly, according to Seagal himself he pretty much walked straight into his first major role as soon as Ovitz (one of the most powerful men in Hollywood at the time remember) suddenly decided he had a career as an actor. In fact, according to Seagal, during his first meeting with a Hollywood bigwig with Ovitz at his side he was literally handed a big pile of scripts and told to pick whichever one he wanted to star in (Seagal, for the curious, picked Above the Law) which kind of suggests someone was pulling strings for him behind the scenes to score such a sweet gig without even trying.

Seagal asserts that the scripts were all un-filmed Clint Eastwood vehicles that the studio wanted to find a new actor for, though others familiar with the situation believe that the studio thought Seagal could be the next Stallone or Schwarzenegger.

Whatever the reason, Seagal was pushed harder than a bears first shit of spring and went on to become a huge action star in spite of his total lack of charisma or acting talent, which is actually kind of impressive if you think about it.