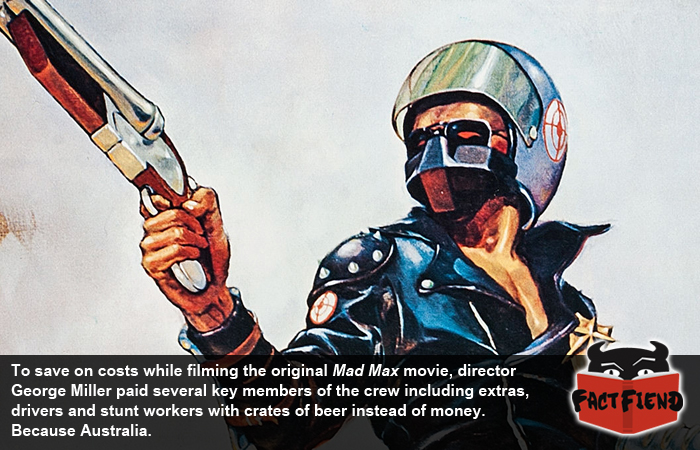 For several years Mad Max held the rather prestigious title of “most profitable film ever fucking made” (emphasis ours) thanks to a combination of an almost non existent budget and massive box office success. If you’re wondering how a film filled with stunts, explosions and kick ass leather jackets, that may have something to do with the fact the director paid some of the crew with beer.

Although an exact figure is almost impossible to pin down, according to director George Miller, Mad Max only cost him around $400,000 to film. To put this in perspective, Alien, which was released in the same year as Mad Max (1979) cost over $10 million to make and The Terminator, which is famous for being filmed on a shoe string budget, cost about $6 million.

Because he had almost no fucking spare money to play around with, Miller went to pretty extreme lengths to ensure that not a single penny was wasted, up to and including looking the other way when his art director decided to steal props so that they wouldn’t have to buy them.

By far the most hilarious, and a-typically Australian way Miller cut down on costs however was by opting to pay a significant chunk of the film’s crew in big-ass crates of beer. According to Miller, everyone from extras to on-set security (which mostly comprised of members of a Australian biker gang called the Vigilantes) were each paid for the services with a case of 24 beers and the promise that they’d help propel a closet bigot to unprecedented levels of fame and fortune.

We’re guessing Miller’s gambit paid off because, well, as previously mentioned, Mad Max’s minuscule budget helped make it one of the most profitable fucking movies ever made when it was released and unsurprisingly grossed an obscene, almost insulting amount of money overseas.

The success of the movie, along with launching the career of Mel Gibson, thus allowing him to land such prestigious roles as “man who can read women’s minds” and “man who kills British soldiers with tomahawk combos and an American flag“.

If you think alcohol is as bodacious as the Mad Max crew, why not read about Chartreuse, a strange liquer made in total secrecy by cool-ass monks.